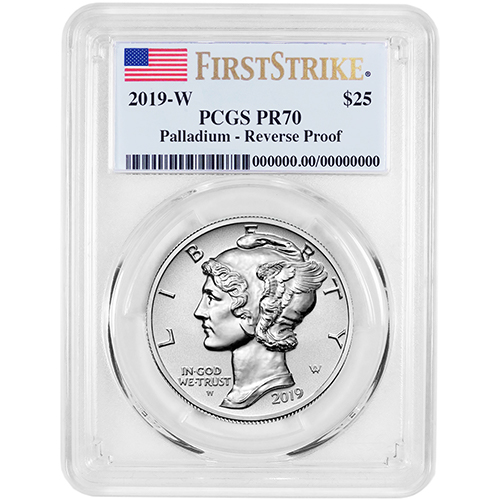 American Palladium Eagles were authorized by the United States Congress with the passage of the American Eagle Palladium Bullion Coin Act of 2010. Though the bill became public law that year, it took until 2017 for the United States Mint to nail down designs and move the coin into production at a time when palladium prices were lower.

On the obverse of 2019-W 1 oz American Palladium Eagle Reverse Proof Coins is the image of Lady Liberty. Known as the Winged Liberty design, this left-profile portrait of Lady Liberty depicts her with a winged cap on her head and it featured on the Mercury Dime in circulation from 1916 to 1945.

The reverse of 2019 American Palladium Eagle Reverse Proof Coins includes a depiction of an American bald eagle on a cliff ledge clutching a branch in its talons. This design also comes from Adolph A. Weinman and was created in 1907 for the American Institute of Architects gold medal design.

These 2019-W 1 oz American Palladium Eagle Reverse Proof Coins earned perfect PR70 grades from the PCGS. Coins in this condition showcase full, original mint luster with no detracting flaws. The reverse proof coins have clear, mirrored design elements overlaying frosted background fields. The coins also come with a First Strike label, indicating each specimen was received by the PCGS within the first 30 days of the 2019 release from the US Mint.

We encourage JM Bullion customers to call us at 800-276-6508 with questions. You can also connect with us online using our live chat and email address options.