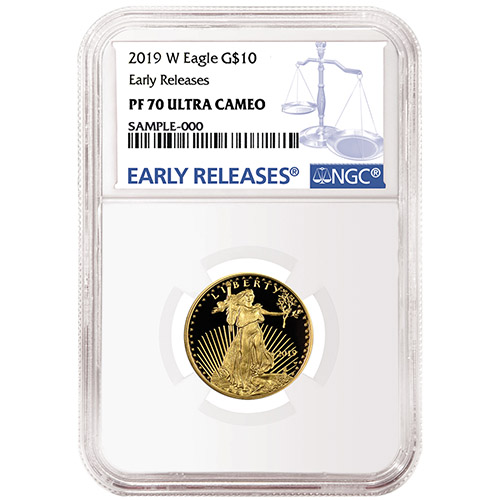 One of two Proof American Gold Eagles introduced in 1988, the 1/4 oz Proof Gold Eagle is among the lowest minted coins in this four-coin collection each year. The Proof Gold Eagle coins share the same obverse and reverse designs as their bullion counterparts and have been issued every year since their individual debuts, with the exception of 2009. The 2019 1/4 oz Proof American Gold Eagle is currently available to you for purchase online from JM Bullion in perfect condition.

The 1/4 oz Proof American Gold Eagle Coin debuted from the US Mint in 1988. It was one of two coins unveiled that year, along with the 1/10 oz coin, and marked the completion of the rollout for the four coins in the series. The 1/4 oz Proof Gold Eagle had the lowest debut release figure among the four coins at 98,028 coins, making it the only one of the four not to cross 100,000 in its debut. It also has the third-lowest mintage figure in program history at just 12,789 coins in 2013.

On the obverse of 2019 1/4 oz Proof American Gold Eagles is the image of Lady Liberty. This design was created by Augustus Saint-Gaudens at the behest of President Theodore Roosevelt who was looking to revitalize the appearance of American coin designs in the early 20th century.

The reverse of 2019 Proof American Gold Eagle Coins features the image of a family of American bald eagles. This design from Miley Busiek includes a male eagle in flight with a female and hatchling in the nest.

These 2019 1/4 oz Proof American Gold Eagles earned perfect PF70 certifications from the NGC. Coins in this condition have full, original mint luster with no detracting flaws present on the product. The additional UCAM label stands for ultra-cameo and refers to the visual brilliance of the coins strike. Each one has strong, frosted matte design elements overlaying deeply-mirrored, clear background fields.

An Early Release designation as highlighted by the ER label relates to the arrival of the coins for certification. Each one was received by the NGC within the first 30 days of its original release from the United States Mint.

We encourage JM Bullion customers to call us with questions at 800-276-6508. You can also connect with us online through our live chat and email address.