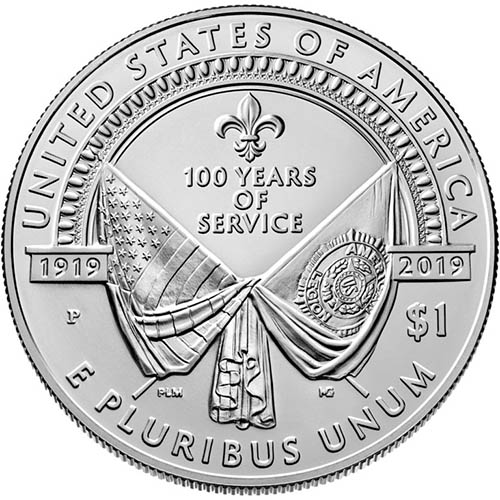 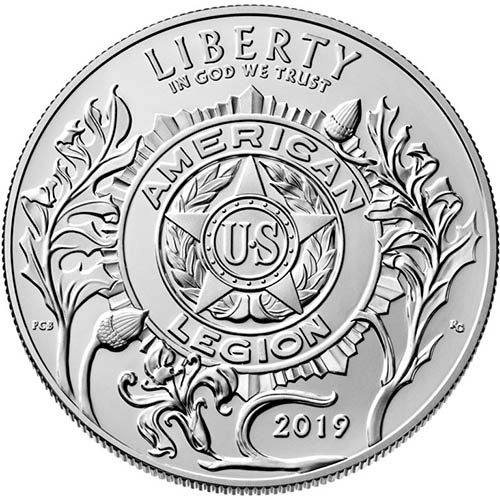 Each of these 2019-P $1 American Legion 100th Anniversary Silver Coins is available to purchase in Brilliant Uncirculated condition. The coins are housed in special presentation packaging that includes a plastic capsule around the coin, a velvet-lined US Mint box, and a Certificate of Authenticity from the US Mint.

On the obverse of 2019-P $1 American Legion 100th Anniversary Silver Coins is the image of American Legions emblem, which includes a five-pointed star with US in the center of the star and the words American Legion on the badge around it. The emblem is flanked by oak leaves and a lily, the latter of which reflects the organizations founding in France.

The reverse face of 2019-P American Legion 100th Anniversary Silver Coins includes two crossed flags. These include the flag of the United States of America and the American Legion. A fleur de lis above the flags marks the groups founding in France and includes inscriptions of the date marks of founding (1919) and the 100th anniversary (2019).

The American Legion serves as a gathering place for US veterans and stands on four pillars of service to Americas war veterans: Veterans Affairs and Rehabilitation, National Security, Americanism, and Children and Youth.

If you have any questions about these coins, please feel free to contact JM Bullion. Our customer service team is available at 800-276-6508, online using our live chat, and via our email address.