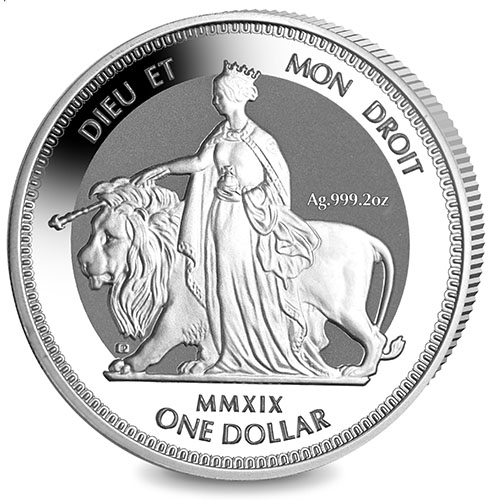 2019 is a special date for commemorative British coins. This year marks the 200th anniversary of Queen Victorias birth. Victoria reigned for 63 years and seven months, setting a new record for the longest reign by any British monarch. The Pobjoy Mint celebrates the occasion with the issuance of stunning reverse frosted silver coins for sale bearing one of the most iconic coin designs of Queen Victorias 19th-century reign. The 2019 2 oz British Virgin Islands Silver Frosted Una and the Lion Coin is now available to you for purchase online from JM Bullion.

In 1839, William Wyon created a new design for 5 Pound sterling British gold coins. The design featured a young Queen Victoria standing at the side of a massive male lion. The image was created to celebrate the beginning of Queen Victorias reign as the Queen of England following her 1837 coronation.

The William Wyon design now features on the Silver Frosted Una and the Lion Coins issued for the British Virgin Islands by the Pobjoy Mint, Britains only private mint and the largest family-owned private mint in Europe. The design features on these 2 oz silver coins in 2019, along with a 1 oz and 5 oz silver option as well.

On the reverse of 2019 2 oz British Virgin Islands Silver Frosted Una and the Lion Coin is the Wyon design that depicts Queen Victoria as Lady Una from the poem The Faerie Queene, which was written in 1590. Her Majesty is depicted with a scepter in her right hand that she guides the lion with. An inscription above her head in Latin reads DIEU ET MON DROIT, which translates into English as God on my Right.

The obverse of 2019 BVI Silver Frosted Una and the Lion Coins includes the Pobjoy Mints exclusive depiction of Queen Elizabeth II. The great-great-granddaughter of Queen Victoria, as of 2012 Elizabeth II is now the longest-reigning monarch in British history. This effigy was designed by Jody Clark and is similar to the Royal Mint image, but it goes further to include the Queens neckline and shoulders in the bust.

All of these 2019 2 oz British Virgin Islands Silver Frosted Una and the Lion Coins are available inside protective flips, mint tubes of 12 coins, or boxes of 360 coins. The specimens are in Brilliant Uncirculated condition with reverse frosted visuals, the latter indicating mirrored design elements with frosted background fields.