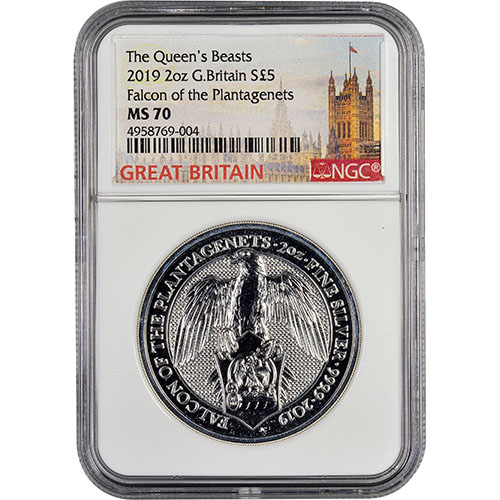 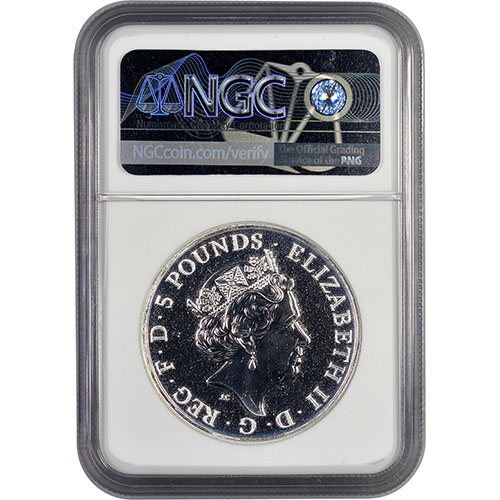 Queens Beast coins from the Royal Mint of England come with impressive variety. The 10 designs offered in the collection are each available as gold, silver, and platinum bullion options, with collectible proof coins available in both gold and silver as well. Today, 2019 2 oz British Silver Queens Beast Falcon of the Plantagenets coins are available to you online from JM Bullion in perfect condition.

The White Falcon heraldic beast comes from King Edward III, one of the greatest kings from the House of Plantagenet. The Plantagenets ruled England from 1154 when King Henry II ascended to the throne until the death of King Richard III in battle in 1485. Edward III reigned for 50 years during the 14th century and enjoyed the second-longest reign in Medieval England.

All of the 2019 2 oz British Silver Queens Beast Falcon of the Plantagenets Coins available to you here today come with a perfect certification. The NGC issues a Mint State 70 certification to coins with full, original mint luster and no detracting flaws on the design elements or surface areas of the coin.

The reverse of 2019 British Silver Queens Beast Falcon Coins includes the seal of King Edward III. His personal seal included a white falcon as a heraldic beast because he had a deep love for hawking and falconry. His seal often included a fetterlock, which depicted in an open position indicated ones rightful claim to the throne of England.

Jody Clarks White Falcon of the Plantagenets design for these Silver Queens Beast coins includes a large white falcon supporting the shield of Edward III. On that shield, youll find a second white falcon clutching an open fetterlock as a modern symbol of Queen Elizabeth IIs rightful claim to the throne of England.

On the obverse of 2019 British Silver Queens Beast Falcon of the Plantagenets coins is the right-profile portrait of Her Majesty, Queen Elizabeth II. The Queens effigy featured here is the fifth-generation one used during her long reign and was created by Jody Clark in 2015.

Please feel free to reach out to JM Bullion with your questions about silver for sale. You can call us at 800-276-6508, chat with us live online, or simply email us.