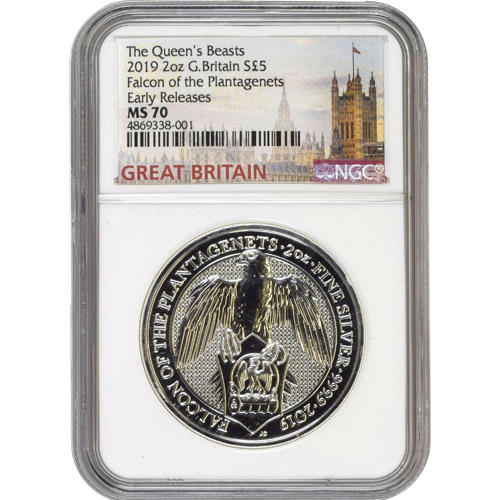 Each of the 2019 2 oz British Silver Queens Beast Falcon of the Plantagenets coins in this product listing is in perfect condition. Coins with a Mint State 70 certification exhibit full, original mint luster with no detracting flaws of any kind found on the surface areas or design elements.

Coins with an Early Release label in the slab from the NGC arrived for certification within a certain time window. In order to earn the ER label, coins must arrive at the NGC within the first 30 days of their release date by the Royal Mint.

On the reverse of 2019 2 oz British Silver Queens Beast Falcon Coins is the image of King Edward IIIs white falcon. Edward III had a love of hawking which explained his use of the white falcon as a personal symbol. The design includes a large falcon holding a shield in its talons. On the shield, another white falcon clutches an open fetterlock.

Edward III ruled England for 50 years during the 14th century, making him the second-longest ruler of England in the medieval period behind his great-grandfather Henry III. Edward III was a Plantagenet king from a family that originated in Anjou, France and ruled England from Henry IIs ascension in 1154 to Richard IIIs death in battle in 1485.

The obverse of 2019 British Silver Queens Beast Coins features the right-profile portrait of Queen Elizabeth II. Her Majesty is now the longest-ruling monarch in the history of England and has been on the throne since 1952 when her father died.

If you have any questions about silver for sale, please feel free to reach out to JM Bullion. Were available at 800-276-6508, online using our live chat, and via our email address.