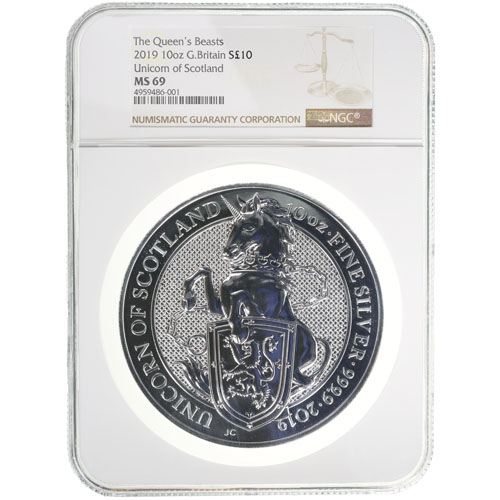 When you buy silver from the Royal Mint of Englands Queens Beast Series, youll find two primary options as investment-grade coins. The program launched in 2016 with a 2 oz silver coin, the first-ever coin of its type from the Royal Mint. In 2017, the collection expanded with 10 oz silver bullion coins joining the 2 oz option. The 2019 10 oz British Silver Queens Beast Unicorn Coins is currently available to you for purchase from JM Bullion in perfect condition.

The Kingdom of Scotland and Kingdom of England were not officially united until the Acts of Union in 1707, but unification of the two crowns through one person took place more than a century earlier with the ascension of James VI of Scotland to the throne of England.

Following the death of Queen Elizabeth I with no heirs, her closest living relative was chosen as the new ruler of England. James VI of Scotland unified the crowns through his person and brought the Unicorn of Scotland to the heraldry of the Royal Arms of England. To this day, the Unicorn supports the shield alongside the Lion of England.

On the reverse of 2019 10 oz British Silver Queens Beast Unicorn Coins is the image of the Unicorn of Scotland. The beast has long been a symbol for Scotland was chosen by James to be part of his new heraldic seal when he united the thrones in 1603. This design, however, reflects the White Unicorn of Scotland supporting the historic shield of Scotland. Adopted during the reign of Alexander III, King of Scots, in the 13th century, the shield has a single rampant lion on it.

These 2019 10 oz British Silver Queens Beast Unicorn Coins are available to you in near-perfect condition. Coins with a Mint State 69 certification have full, original mint luster with a maximum of two minor detracting flaws. Acceptable flaws on an MS69 coin include only minuscule contact marks and hairlines.

We encourage JM Bullion customers to contact us with questions at 800-276-6508. You can also reach out to us online using our live chat and email address options.