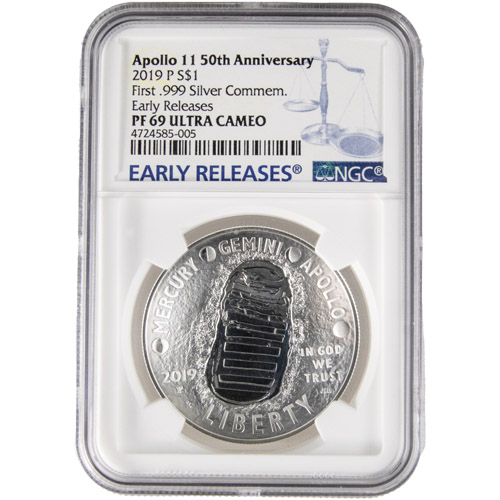 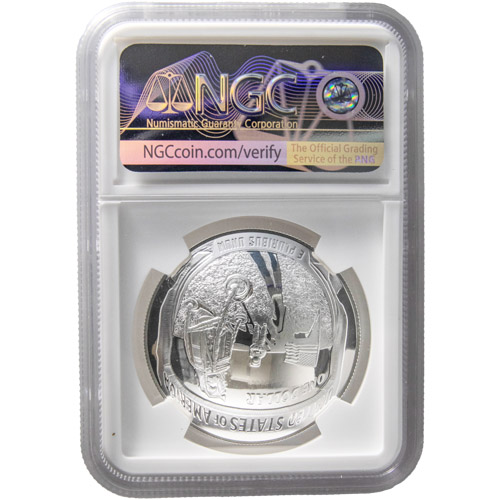 In 2019, the United States Mint marked the 50th anniversary of one of America’s seminal achievements from the 20th century. In the aftermath of World War II, the Cold War between the United States and the Soviet Union played out around the globe and even into outer space, with America landing the knockout blow in July 1969. Today, near-perfect 2019 $1 Proof American Apollo 11 50th Anniversary Silver Coins are available to you online at JM Bullion.

In July 1969, NASA achieved a goal set forth for the nation and NASA earlier in the decade by President John F. Kennedy. President Kennedy challenged the nation to win the Space Race by sending a man to the Moon and returning him safely to Earth. Apollo 11 was an eight-day mission that saw two American astronauts spend a total of 21.5 hours on the lunar surface before returning safely home to planet Earth.

All of these 2019 $1 Proof American Apollo 11 50th Anniversary Silver Coins are available in near-perfect condition. Coins with a PR69 or PF69 certification have full, original mint luster and a maximum of two minor detracting flaws. Those flaws are limited in nature to minuscule contact marks or hairlines that must be located outside the primary fields of the coin.

Please note that JM Bullion offers these coins to you with the potential for grades from either the PCGS or NGC. The specific grading house and any additional labels can vary and will be determined after your payment has cleared and we fulfill your order. If you buy multiples, please note you could get coins with matching label designs and grades.

On the obverse of 2019 Proof American Apollo 11 50th Anniversary Silver Coins, you will find the boot print of an astronaut on the lunar surface. This side of the coin has a concave, sunken field that helps enhance the appeal of the design.

The reverse side of the 2019 $1 Proof Apollo 11 50th Anniversary Silver Coin comes with a depiction of Neil Armstrong, the American flag, and the Eagle lunar lander. These elements are reflected in the helmet of Buzz Aldrin and the imagery is based on an actual photo taken on the lunar surface. This side of the coin is convex, or domed.

JM Bullion customer service is happy to assist with any questions when you buy silver online. You can call us at 800-276-6508, chat with us live online, or email us directly.