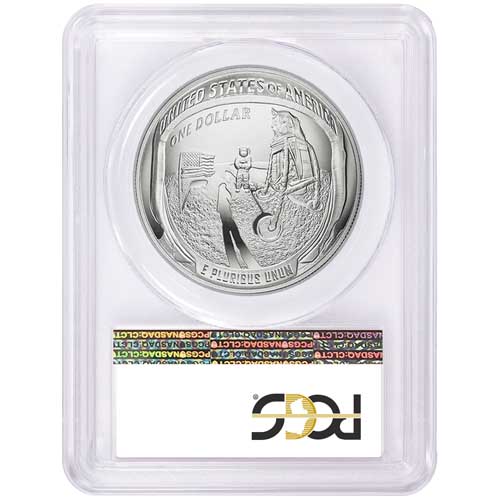 The United States Mint celebrates the 50th anniversary of the Apollo 11 mission to the moon with the release of gold and silver coins for sale. The silver series focused on a 1 oz uncirculated, 1 oz proof, and 5 oz proof coin. Each of the coins, silver or gold, shares the same design. The 2019 $1 Proof American Apollo 11 50th Anniversary Silver Coins are now available to you for purchase online from JM Bullion.

The mission to the moon known as Apollo 11 was the fifth-manned mission into outer space launched by NASA. The mission launched from Merritt Island, Florida, and landed on the moon four days later. The three-man crew consisted of Michael Collins, Buzz Aldrin, and Neil Armstrong.

On the reverse face of 2019 Proof American Apollo 11 50th Anniversary Silver Coins is convex and captures the appearance of Aldrins helmet and visor. Based on an actual photo taken by Aldrin, in the visor you can see Neil Armstrong standing on the surface of the moon with an American flag and the Eagle lunar lander nearby.

These 2019 $1 Proof American Apollo 11 50th Anniversary Silver Coins are available with a PR70 certification from the PCGS. The coins have full, original mint luster with no detracting flaws. Proof specimens, these coins also boast frosted designs and mirrored background fields.

Included with each of these coins is a First Strike label. The issuance of an FS label means that these coins were received for grading within the first 30 days of their release by the United States Mint.