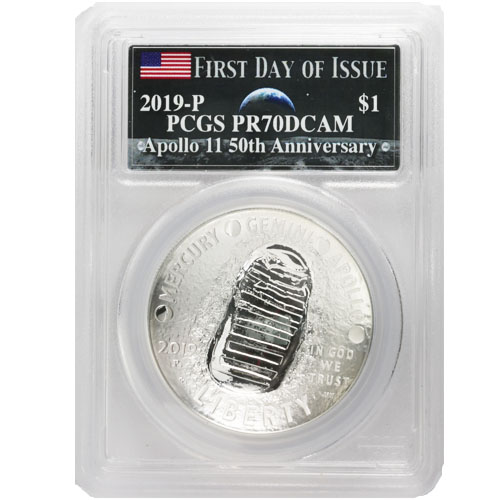 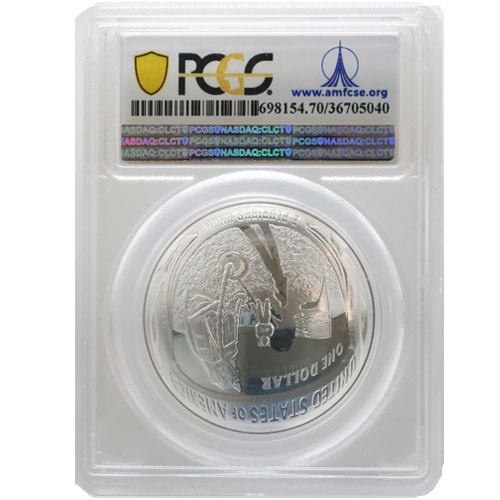 The silver coins for sale in the United States Mints Apollo 11 Series had a mintage cap of 400,000 coins in total across a release of three different coins. These included two $1 (USD) silver coins, bullion and proof, as well as a 5 oz proof coin. Each one had the same designs on the obverse and reverse. The $1 proof silver coin is currently available to you at JM Bullion. Today, the 2019 $1 Proof American Apollo 11 50th Anniversary Silver Coin is available to you online from JM Bullion in perfect condition.

In July 1969, NASA sent three men to space on its Apollo 11 mission. A decade of chasing the goal set forth by President John F. Kennedy to send a man to the moon and return him safely to Earth had suffered setbacks and deaths, but was about to culminate in one of the greatest of humanitys achievements in the 20th century. Neil Armstrong and Buzz Aldrin not only set foot on another celestial body, but each man also returned safely to Earth afterward.

All of the 2019 $1 Proof American Apollo 11 50th Anniversary Silver Coins available through this listing come with a sealed plastic slab and the PR70 designation of the PCGS. Coins in this condition are perfect specimens that have full, original mint luster and present with no detracting flaws of any kind present on the designs or background fields.

The included First Day of Issue label indicates the coins arrived within 24 hours of the US Mints release in 2019. The coins must arrive at the PCGS in a sealed box within that timeframe to qualify for the label.

In the obverse design element, a footprint left behind by Armstrong or Aldrin on the moon is depicted in a sunken, concave field. The reverse of the 2019 $1 Proof American Apollo 11 50th Anniversary Silver Coins includes the images of Armstrong, the lunar lander, and an American flag as captured in a reflection on the visor of Aldrin. This side of the coin is domed for greater visual impact.

These coins were produced by the Philadelphia Mint for the US Mint in this series and come with a P mint mark on the obverse side of the coin.

Please feel free to contact JM Bullion with any questions. Our customer service team is available to you at 800-276-6508, online using our live chat, and via our email address.