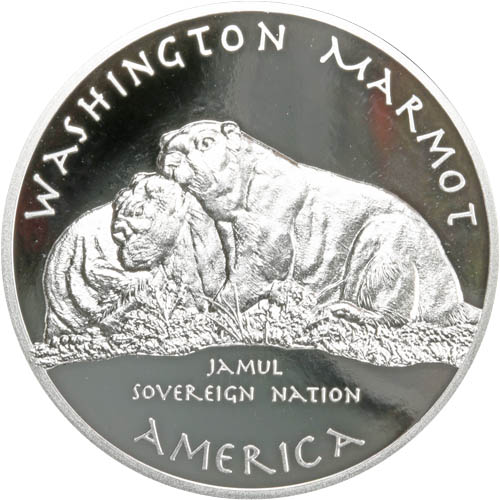 Among the last indigenous tribes on the North American continent to encounter European explorers and settlers were those people living on the Pacific Coast. The Chinook people of Oregon and Washington first encountered outsiders when the Corps of Discovery led by Lewis and Clark finally reached the Pacific during their journey to chart the lands of the Louisiana Purchase. Now, 2019 1 oz Proof Washington Chinook Marmot Silver Coins are available to you for purchase online from JM Bullion.

The Chinook people, also referred to as Chinookan people or the Chinook Indian Nation, is a group of several indigenous tribes in the Pacific Northwest. These people are connected by their shared language and lived along the Lower and Middle Columbia Rivers in Oregon, as well as from Tillamook Head north to Willapa Bay in southwestern Washington state.

The Chinook Indian Nation as it exists today is not a federally recognized tribe. The nation had been granted that status during the Clinton administration, but had it revoked during the administration of President George W. Bush. The Chinook Indian Nation is working to regain that status and it represents a collective of five tribes: Lower Chinook, Clatsop, Willapa, Wahkiakum, and Kathlamet.

On the obverse of the 2019 1 oz Proof Washington Chinook Marmot Silver Coin is a depiction of one of the members of the Chinook people. There are actually indigenous people speaking Chinookan languages that exist in federally recognized tribes, including the Yakima Nation and the Confederated Tribes of the Warm Springs Reservation. Today, some 2,700 people identify as Chinookan and they still live predominantly in Oregon and Washington.

The reverse of 2019 Proof Washington Chinook Marmot Silver Coins features the image of a marmot. The marmot is a large squirrel and it can be separated out into 15 different species. These large rodents are notable for their short, robust legs.

These 2019 1 oz Proof Washington Chinook Marmot Silver Coins are available to purchase brand new inside of protective plastic capsules. The coins are issued with frosted designs and mirrored background fields.

We encourage JM Bullion customers to call us with questions when buying silver at 800-276-6508. You can also connect with us online through our live chat and email address features.