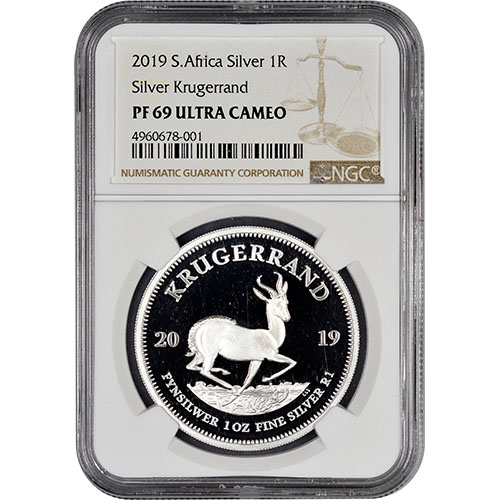 Silver Krugerrand coins were first introduced by the South African Mint in 2017. This year marked the 50th anniversary of the Gold Krugerrand and the mint celebrated with two major firsts. In addition to a Premium Uncirculated and Proof Silver Krugerrand, the mint also struck and issued a Platinum Krugerrand.

The 2019 1 oz Proof South African Silver Krugerrand is the only coin that has continued each year since 2017. The Premium Uncirculated coin was replaced in 2018 with a new BU version of the coin and the Platinum Krugerrand was a one-year issue for the 50th anniversary only. Just 20,000 of these 2019 Proof Silver Krugerrands were initially struck.

On the obverse of 2019 1 oz Proof South African Silver Krugerrand Coins is the depiction of Paul Kruger, former President of the South African Republic. Kruger was a leading Boer figure in the late-19th century and his portrait has graced this collection since its 1967 debut. This particular effigy was modernized in 1984 by Otto Shultz.

The reverse of 2019 Proof Silver Krugerrand Coins includes a depiction of the Springbok antelope. This creature is the official symbol of South Africa and is found throughout the plains of the southern stretches of the African continent. This design has likewise been in use since 1967 and was also modernized in 1984, with Coert Steynberg completing the work.

These 2019 1 oz Proof South African Silver Krugerrand Coins are available to you today in near-perfect condition. PF69 coins from the NGC have full, original mint luster with a maximum of two minor detracting flaws. The included UCAM label indicates the coins have strong, frosted designs and deeply-mirrored, clear backgrounds.

We encourage JM Bullion customers to call us with questions at 800-276-6508. You can also connect with us online through our live chat.