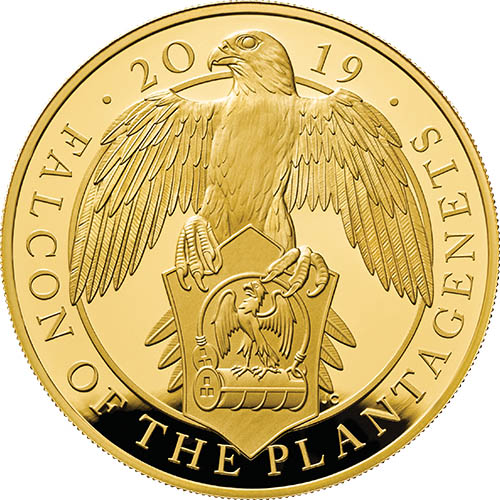 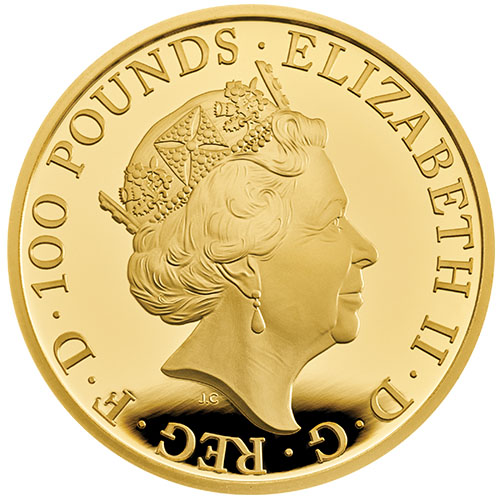 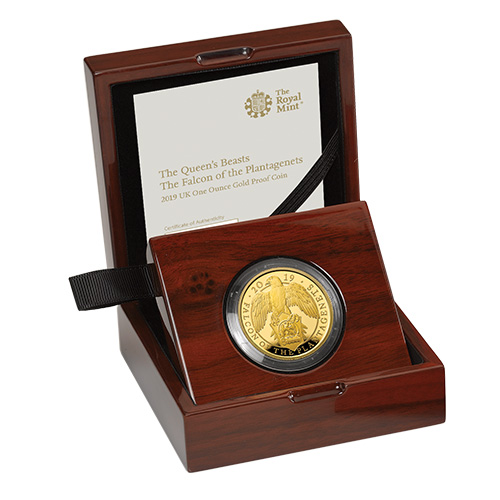 The Queens Beast Series reaches its halfway point with the release of the Falcon of the Plantagenets Coin, the first of two coins with a 2019 date mark. From one of the most powerful controlling houses of the British crown, the Falcon was popular with monarchs for more than 400 years. Right now, 2019 1 oz Proof British Gold Queens Beast Falcon of the Plantagenets Coins are available to purchase online from JM Bullion.

Each of the 2019 1 oz Proof British Gold Queens Beast Falcon of the Plantagenets coins in this listing comes to you with a wooden display box from the Royal Mint. Included within the box is a numbered Certificate of Authenticity from the Royal Mint.

The Proof Gold Queens Beast Coins have a beautiful, frosted finish on the design elements with a contrasting mirrored background field. The proof coins in the Queens Beast range are released at different times than their gold bullion counterparts. While the Falcon of the Plantagenets is the sixth issue in the bullion series, the Falcon is actually the fifth release in the proof collection of the coins.

On the obverse of all 2019 Proof Gold Queens Beast Coins is the fifth-generation portrait of Queen Elizabeth II. This portrait captures the Queen at the age of 89 in a right-profile relief. Created in 2015 by Jody Clark, this design features on all British coins with a date mark of 2016 or later. The portrait shows the Queen wearing the diamonds of the Royal Diadem crown.

The reverse of the 2019 1 oz Proof Gold Queens Beast Falcon of the Plantagenents coin is one of Englands oldest heraldic symbols. The Plantagenet house originated in France and eventually split in England in the House of York and House of Lancaster, with Henry VIIs marriage to Elizabeth of York finally joining the two houses.

King Edward II choose the white falcon as his symbol as an embodiment of his love of hawking and falconry. The bird is closely associated with both Edward III and his great-great-grandson King Edward IV.

If you have any questions, please dont hesitate to contact JM Bullion. You can call us at 800-276-6508, chat with us live online, or simply send us an email with your questions.