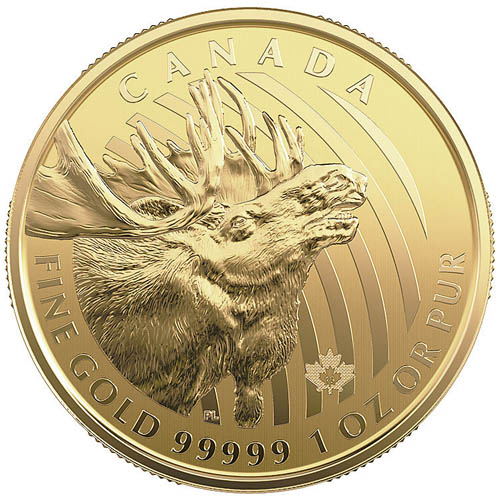 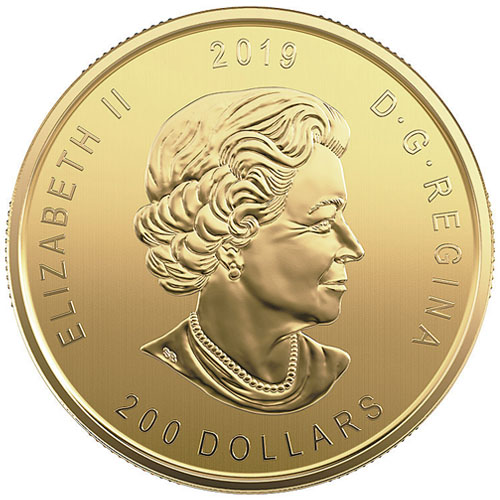 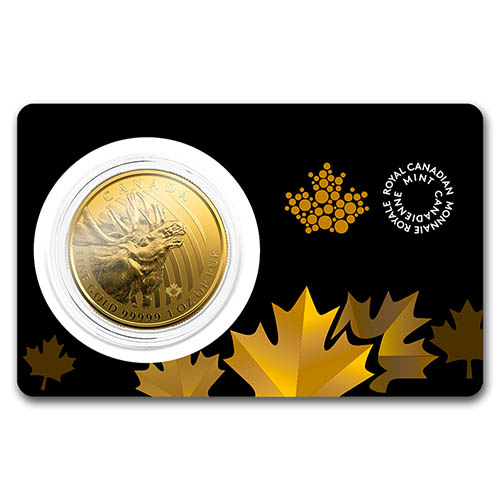 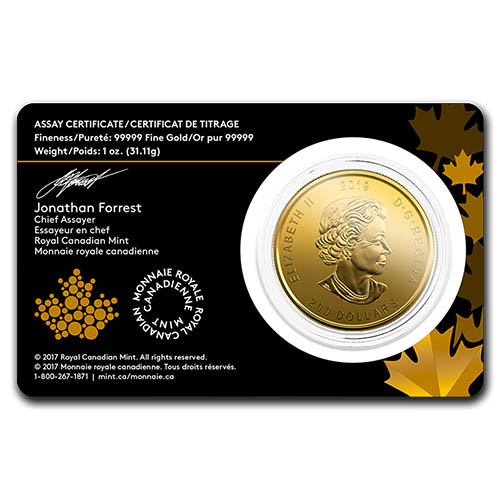 The Royal Canadian Mints Call of the Wild Series is a unique issue from Canada that focuses once again on the native wildlife found throughout the vast wildlands of the nation. The moose is one of the largest mammals walking the wilds of North America. Right now, 2019 1 oz Canadian Gold Moose Coins are available to purchase online from JM Bullion.

Each of the 2019 1 oz Canadian Gold Moose Coins in this product listing come to you in Brilliant Uncirculated condition. A rarity in gold bullion coinage, the Royal Canadian Mint issues these coins with .99999 pure gold content. The coins are housed individually inside of credit-card sized packages that include an assay card in the design and the signature of the Royal Canadian Mints official assayer.

The Call of the Wild Series from the Royal Canadian Mint features shared design elements on all coins. Most notably is the use of sound waves on the reverse side of the coin accompanying the animal featured in the design. The moose has a reputation for violent outbursts when its territory is challenged or it perceives a threat to its young, but most Canadians know the moose as a gentle giant.

On the reverse side of all 2019 1 oz Canadian Gold Moose Coins is the image of a male moose, known as a bull. The average bull moose weighs 1,322 pounds, but it is not unusual for a bull moose to weigh as much as 3,306 pounds in the wild. Moose typically inhabit forests throughout the country from the border with the US state of Alaska to Newfoundland and Labrador.

The obverse of 2019 Canadian Gold Moose Coins includes the image of Queen Elizabeth II. This is the fourth-generation design to feature on Canadian coins and was designed back in 2003 by Susanna Blunt. The right-profile portrait is unique in that it features the Queen without a crown on her head, something Canadian coins havent done since her father George VIs reign.

Founded in 1908, the Royal Canadian Mint is the sovereign mint of Canada. It originally included only the Ottawa Mint facility, but today includes a secondary Winnipeg Mint facility. The two mints fulfill different roles, with Ottawa striking commemorative and bullion coins while Winnipeg focuses on circulation currency.

If you have any questions about this gold for sale, please contact JM Bullion. You can call us at 800-276-6508, chat with us live online, or simply send us an email.