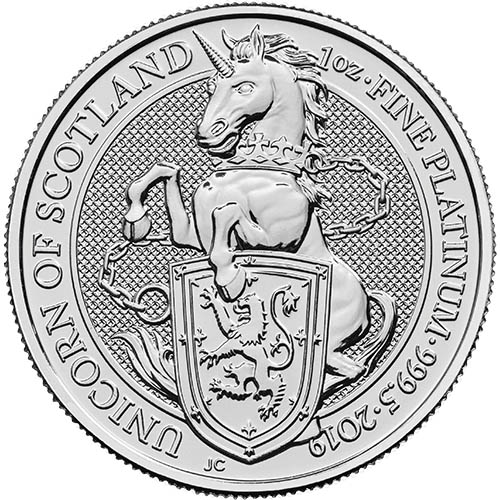 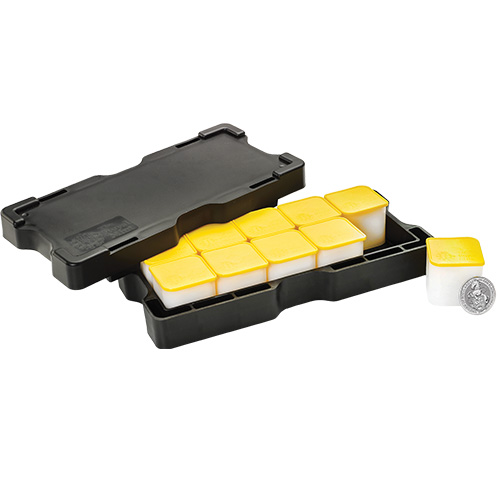 The Queens Beast coins from the Royal Mint are available with a total of 10 planned designs across gold, silver, and platinum releases. The first issues in the series included 2 oz silver, 1/4 oz gold, and 1 oz gold options when the program debuted in 2016. In 2017, popular expansions came to the program in the form of an additional silver coin and a new platinum coin. Today, 2019 1 oz British Platinum Queens Beast Unicorn of Scotland coins are available to you from JM Bullion.

The first accounts of unicorns in human history date back to roughly 400 BC, and though many people of this era believed the beasts existed, modern scholars believe that ancient societies simply mistook other animals in the wild such as a rhinoceros or wild bull as a horse. The myth behind the beast stuck though and the creatures became feared as strong and fierce beasts.

All of these 2019 1 oz British Platinum Queens Beast Unicorn of Scotland Coins are available to you in Brilliant Uncirculated condition. The coins in this listing are available individually inside of protective packaging, as quantities of 10 housed in protective tubes, or as quantities of 100 coins housed in Monster Box containing a total of 10 tubes.

On the reverse side of 2019 1 oz British Platinum Queens Beast Unicorn Coins, youll find the Unicorn of Scotland as depicted at the coronation of Queen Elizabeth II. The Unicorn of Scotland is often featured standing on its hind legs with its front hooves supporting the royal coat of Scotland. This design has remained the same since the 13th-century rule of Alexander III in Scotland. It includes a singular rampant lion, typically featured in color as a red lion on a yellow field.

The obverse of 2019 British Platinum Queens Beast Unicorn of Scotland coins includes the definitive fifth-generation portrait of Her Majesty. Queen Elizabeth II is depicted in right-profile relief at the age of 89 with the Royal Diadem crown upon her head.

Please feel free to reach out to JM Bullion with your questions about platinum coins. You can call us at 800-276-6508, chat with us live online, or simply send us an email with your inquiries.

Scott from - October 22, 2019
"What a wonderful coin. Fits into a 32 mm Gold American Eagle Direct Fit Capsule but wiggles a little due to its density and thinner features than a Gold counterpart. "