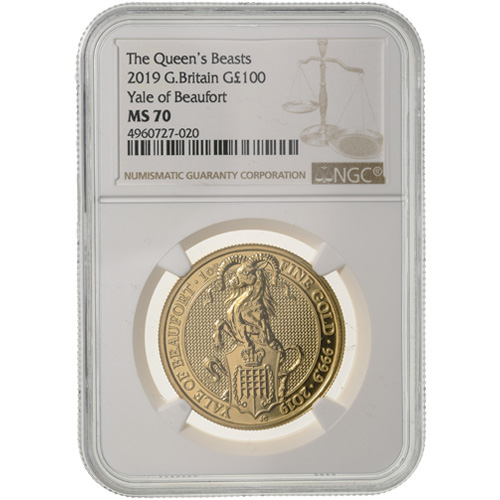 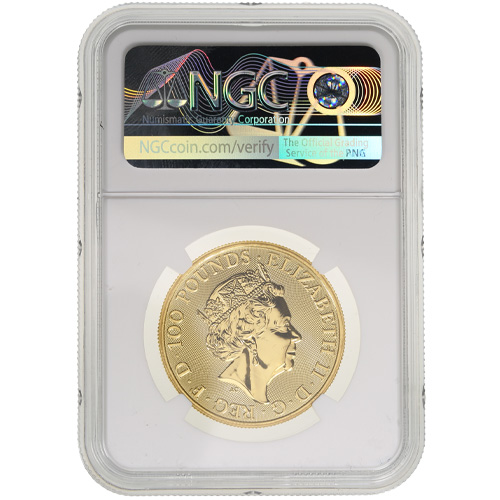 The Royal Mint of Englands most popular gold coins for sale at the moment might just be those in the Queens Beast Series. Each of the 10 designs is available with 1 oz and 1/4 oz gold options in the bullion range, in addition to several gold weights available in a proof coin. The 2019 1 oz British Gold Queens Beast Yale of Beaufort Coin is now available to you for purchase online from JM Bullion in perfect condition.

Queens Beast coins from the Royal Mint include 10 designs throughout the series, which runs from 2016 to 2021. Each of the heraldic beasts depicted in this collection was also featured in the form of carved statues at the 1953 coronation ceremony for Queen Elizabeth II at Westminster Abbey.

Each of the heraldic beasts is unique in that it came to the British Royal Arms over the course of more than 900 years of English history. The Yale of Beaufort is itself more than 530 years old and comes indirectly through King Henry VII, founder of the House of Tudor. The symbolism and shield actually originated with his mother, Lady Margaret Beaufort.

On the reverse of 2019 1 oz British Gold Queens Beast Yale of Beaufort coins is her seal, handed down to her from her father, John Beaufort, Duke of Somerset. The only heiress of the Duke of Somerset, Lady Margaret carried the Yale of Beaufort with its mythical beast as the central piece. Yales are often depicted as goat- or antelope-like figures with varying sized horns on their head and boar tusks on their snout.

The obverse of 2019 British Gold Queens Beast Coins includes the fifth-generation effigy of Queen Elizabeth II. Here, Her Majesty is depicted in right-profile relief wearing the Royal Diadem crown. This image was created in 2015 for the Royal Mint by Jody Clark.

2019 1 oz British Gold Queens Beast Yale of Beaufort coins are available to you in this listing with a perfect certification. Mint State 70 coins showcase full, original mint luster with no detracting flaws present on the coin.