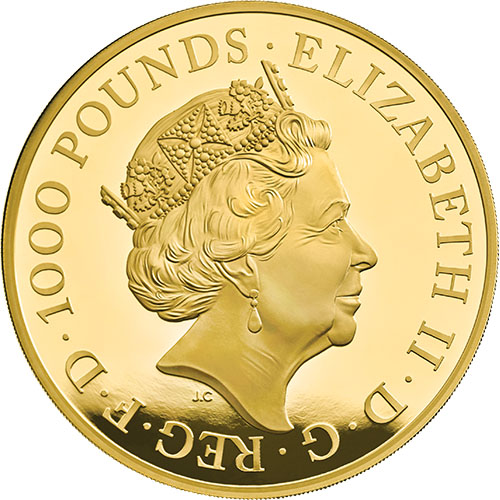 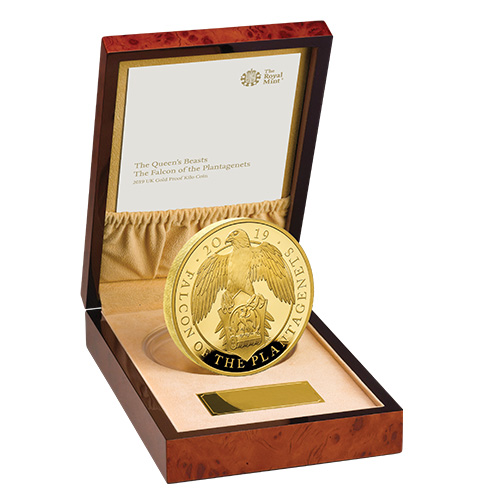 The Proof Queens Beast range of coins from the Royal Mint offers collectors with different options compared to the coins of the bullion range. For example, the Gold Queens Beast bullion coins feature a 1/4 oz and 1 oz gold option, while the Proof Gold Queens Beast coins have 1 oz, 5 oz, and 1 Kilo choices. The 2019 1 Kilo Proof British Gold Queens Beast Falcon of the Plantagenets Coins are currently available to you for purchase online from JM Bullion.

The House of Plantagenet was a huge and powerful house royal house that not only ruled England, but vast swaths of Europe as well. King Henry II was the first member of the house to ascend to the English throne when he took control in 1154. Originating in Anjou, France, the House of Plantagenets had two cadet houses in England: House of York and House of Lancaster.

King Edward III was one of the many prominent monarchs from the house and his White Falcon became a popular seal for monarchs in centuries to come. For example, his great-great-grandson King Edward IV used the symbol and it was a favorite of Queen Elizabeth I, daughter of King Henry VIII and the final monarch linked to the house.

On the reverse of 2019 1 Kilo Proof British Gold Queens Beast Falcon of the Plantagenets Coins features the White Falcon shield. This includes a white falcon above the shield, with a second white falcon on the shield holding an open fetterlock as a symbol of a claim to the throne of England.

The obverse of 2019 Proof British Gold Queens Beast Falcon Coins includes the portrait of Queen Elizabeth II. Her Majesty has been on the throne of England since 1952 and is the longest-reigning monarch in the kingdoms history. This fifth-generation design was created in 2015 by Jody Clark.

These 2019 1 Kilo Proof British Gold Queens Beast Falcon of the Plantagenets Coins have an available wooden display box to house the coin and ship to you with a Certificate of Authenticity available.

We encourage JM Bullion customers to contact us with questions at 800-276-6508. You can also connect with us online through our live chat and email address features. The latest price of gold per ounce is also available on our site at all times.