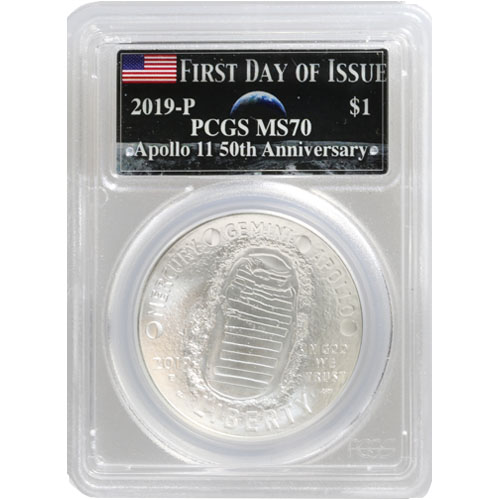 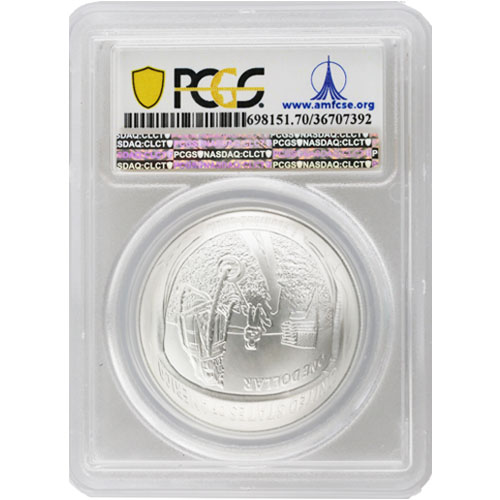 The American Apollo 11 50th Anniversary Silver Coins from the United States Mint were released in 2019 to mark 50 years since NASA successfully sent humans to another celestial body and returned them to the surface of the Earth. Among the many options available was a 1 oz silver bullion coin. Right now, the 2019 $1 American Apollo 11 50th Anniversary Silver Coin is available to purchase in perfect condition online from JM Bullion.

Each 2019 American Apollo 11 50th Anniversary Silver Coin available to you in this product listing earned two distinctions from the PCGS. First, the coins are perfect specimens with a Mint State 70 grade that means each one exhibits full, original mint luster with no detracting flaws of any kind present.

Second, the silver coins earned the First Day of Issue label. This means that the coins were among the first released by the US Mint and were received by the PCGS for grading within the first 24 hours of issue by the mint.

The obverse side of the 2019 American Apollo 11 50th Anniversary Silver Coin features a sunken, concave, design field that has an astronauts footprint in the surface of the moon. The footprint accurately reflects the boots that made up the spacesuits of astronauts Buzz Aldrin and Neil Armstrong as the duo completed their lunar exploration in July 1969.

On the reverse face of 2019 $1 American Apollo 11 50th Anniversary Silver Coins is a depiction of a popular photograph taken by Buzz Aldrin on the lunar surface in the summer of 1969. The photo captured a reflection of Neil Armstrong, the Eagle lunar lander, and the American flag on the visor of Aldrins helmet. The convex, domed surface on this side perfectly captures the visor of Aldrin and brings the design to life.

All of the American Apollo 11 50th Anniversary Silver coins were produced by the US Mint at its Philadelphia Mint facility with a P mint mark below the date on the obverse. There was a maximum mintage of 400,000 coins to be struck across the $1 bullion, $1 proof, and $5 proof silver coins in this design release.

If you have any questions, JM Bullion customer service can help. We ask you to call us at 800-276-6508, chat with us live online, or email us directly.