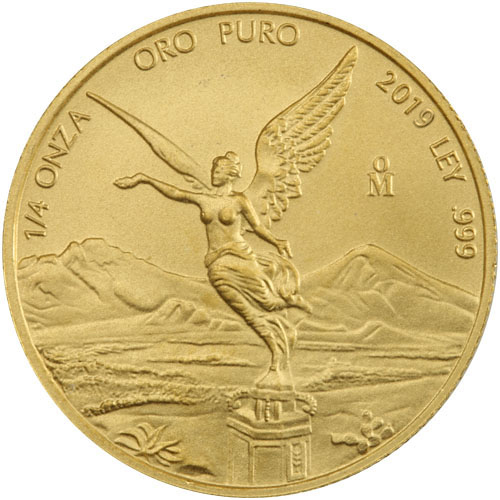 The gold for sale from the Mexican Mint’s Gold Libertad series is one of the world’s major bullion collections, yet also offers the lowest mintage figures you’ll mind among comparable coins. For example, the five weights annually issued totaled less than 10,000 coins sold in all during 2018. The 2019 1/4 oz Mexican Gold Libertad Coins are currently available to you for purchase online from JM Bullion.

The first release of Mexican Gold Libertad coins came in 1981, predating both the Chinese Gold Panda and American Gold Eagle coins. However, despite becoming the third coin to offer private investors a gold bullion coin option behind the Gold Krugerrand and Gold Maple Leaf, the Gold Libertad did not hang around for long initially.

Gold Libertads were issued in three weights in 1981, but then halted for a full decade. The coins would return in 1991 with the three original weights available and two new fractional weights included in the form of the 1/10 oz and 1/20 oz coins. The smallest coin, initially, in the series was the 1/4 oz Gold Libertad coin. The 1981 release of the coin in this weight had a mintage of 313,000 coins, but its most recent figure is just 1,250 coins in 2018, the joint-lowest figure along with the 1 oz coin.

On the obverse of Mexican Gold Libertad coins is the figure of Winged Victory. A symbol of pride to the Mexican people dating back to their revolution against Spain in the early 19th century, Winged Victory first appeared on the gold Centenario coin in 1921. Her figure returned to Mexican gold coins on the Gold Libertads in 1981 and was modernized from that design in the early 2000s.

The reverse of 2019 1/4 oz Mexican Gold Libertad coins includes the coat of arms for Mexico. In this modern rendition, an eagle sits on the arm of a cactus as it fights with a snake. The symbolism is meant to refer to Mexico’s struggle to gain independence from Spain.

We encourage our customers to contact us with questions at 800-276-6508 when browsing our catalog. You can also connect with us online through our live chat service and email address features.