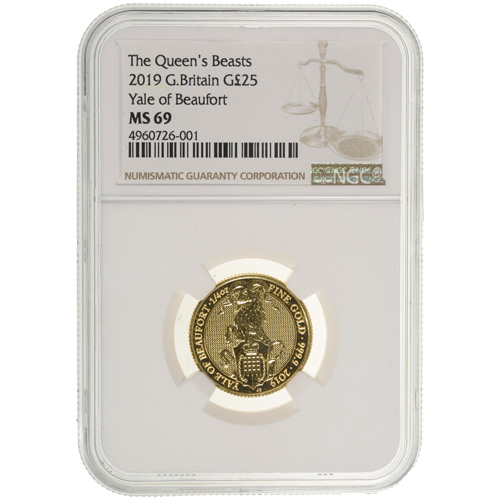 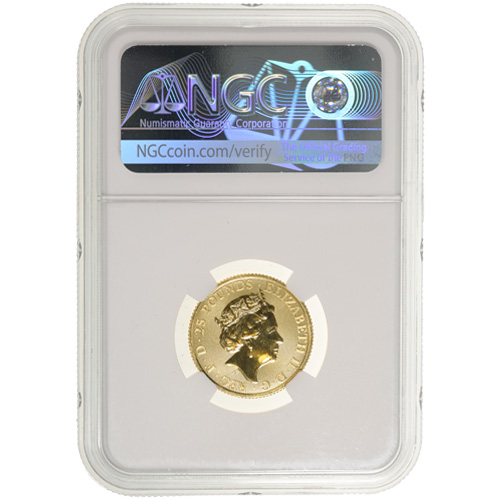 The Yale of Beaufort is the second release in the 2019 schedule for the Queens Beast Series from the Royal Mint of England. Brought to the British Royal Arms through King Henry VII, the Yale is a mythical beast that originated with the Duke of Somerset. Right now, 2019 1/4 oz British Gold Queens Beast Yale of Beaufort Coins are available to purchase online from JM Bullion in near-perfect condition.

Each of these 2019 1/4 oz British Gold Queens Beast Yale of Beaufort Coins is available to you for purchase in near-perfect condition. The NGC assigns a Mint State 69 grade to gold coins with full, original mint luster and a maximum of two minor detracting flaws. Examples of acceptable flaws at this level include only minuscule contact marks or hairlines.

The Yale of Beaufort uses the mythical Yale as the supporting heraldic beast. Often depicted as a goat or antelope, the Yale always has horns on its head and the tusks of a boar on its snout. The beast can be used with a great deal of imagination to either portray grace and elegance or strength and determination.

On the reverse of 2019 British Gold Queens Beast Yale of Beaufort Coins is a depiction of the Yale supporting the shield of Lady Margaret Beaufort. Lady Margaret was the only daughter and surviving heiress of John Beaufort, Duke of Somerset. More importantly, she was the mother of King Henry VII, founder of the Tudor dynasty. Her seal includes a shield with a crown and portcullis badge.