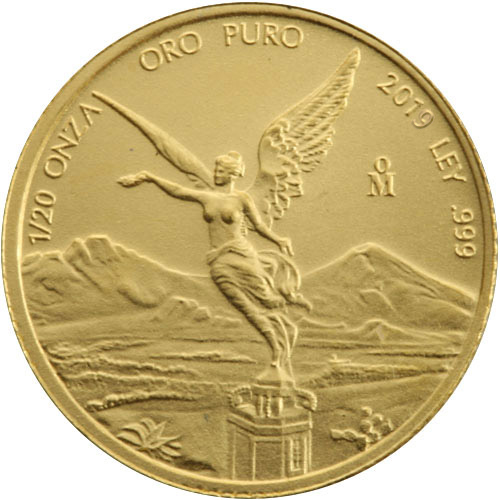 The Mexican Mint’s Gold Libertad Series of coins actually has a shorter history than its silver counterpart, despite being introduced one year earlier initially, but the Gold Libertad has been the steadier of the two coins from its beginning. Introduced in 1981 and established as an annual issue in 1991, the Mexican Gold Libertad coin bears a beautiful design and low mintage figures. Right now, 2019 1/20 oz Mexican Gold Libertad Coins are available to purchase online from JM Bullion.

Each of the 2019 1/20 oz Mexican Gold Libertad Coins available to you for purchase today comes in Brilliant Uncirculated condition. The coins in this listing are offered individually inside of protective flips. The 1/20 oz coins typically offer the greatest availability to investors, with the 2018 version of the 1/20 oz Gold Libertad boasting the highest mintage figure in the series at just 2,500 coins!

Mexican Gold Libertad coins debuted in 1981 with three weights available. These included a 1 oz gold coin accompanied by the 1/2 oz and 1/4 oz coins. All coins were halted for the next decade, eventually returning in 1991. When the Gold Libertad came back, it now featured the 1/10 oz and 1/20 oz options as well.

On the obverse of all 2019 1/20 oz Mexican Gold Libertad Coins is the image of Winged Victory. A powerful symbol of Mexico’s fight for freedom from Spanish colonial rule in the 19th century, this figure holds a wreath high overhead in her right hand while clutching the broken chains of servitude in her left hand.

Winged Victory’s image first appeared on coinage in 1921 when the gold Centenario coin was released bearing her image to mark the nation’s 100th anniversary of independence. This design bears the likeness of Victoria, as she’s known, from the Mexican Independence Victory Column in Mexico City. Standing 17 feet tall in real life, Winged Victory was erected on the column in 1921 to match the release of the Centenario.

The reverse of 1/20 Mexican Gold Libertad coins includes the modern coat of arms for Mexico. This seal includes the image of an eagle on the arm of a cactus as it battles with a serpent. It is surrounded by the engravings of a wreath below and the national name in Spanish above.