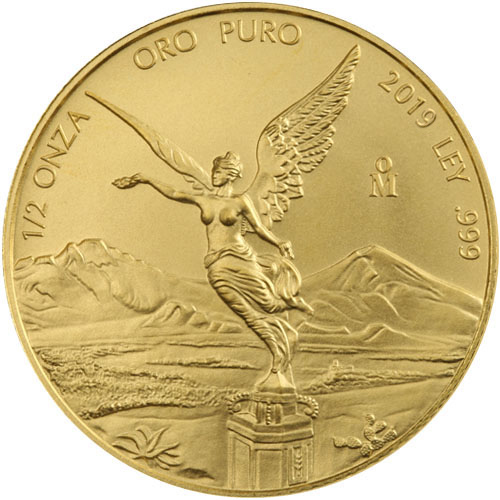 One of the first three coins offered in the Mexican Gold Libertad collection, the 1/2 oz gold coin in this series had the lowest mintage figure in the introductory 1981 issue and has either tied for or had the lowest figure each year it has been available. Right now, 2019 1/2 oz Mexican Gold Libertad Coins are available to purchase from JM Bullion.

Each 2019 1/2 oz Mexican Gold Libertad Coin in this product listing comes to you in Brilliant Uncirculated condition. The coins are issued by the Mexican Mint inside of protective flips and come with one of the lowest mintage figures you’ll find in any gold bullion program.

On the obverse of 2019 Mexican Gold Libertad Coins is the design of Winged Victory. Her figure features as a 17-foot tall statue atop the Mexican Victory Independence Column in Mexico City where it was erected in 1921 to mark 100 years of independence for the nation. She holds a crown wreath over her head in her right hand and in her left she holds the broken chains of colonial servitude.

The reverse of all 2019 1/2 oz Mexican Gold Libertad Coins includes the modern seal of Mexico. The nation’s coat of arms includes an eagle sitting on the arm of a cactus as it battles a serpent. The design reflects Mexico’s battle against Spain for independence, with the eagle representing Mexico and the snake Spain.

Founded in 1535, the Mexican Mint was built by Spanish conquistadors to both refine gold and silver for shipment to Europe and to strike colonial coinage for Spain’s colonies throughout the Western Hemisphere. Today it is the sovereign mint of Mexico and operated by Banco de Mexico.

If you have any questions about buying gold, please don’t hesitate to ask. JM Bullion customers are encouraged to call us at 800-276-6508, chat with us live online, or simply send us an email.