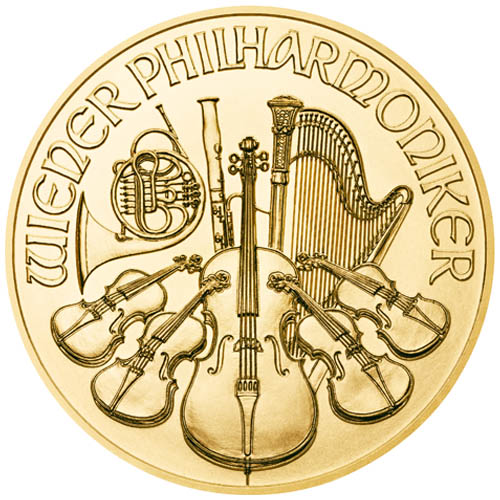 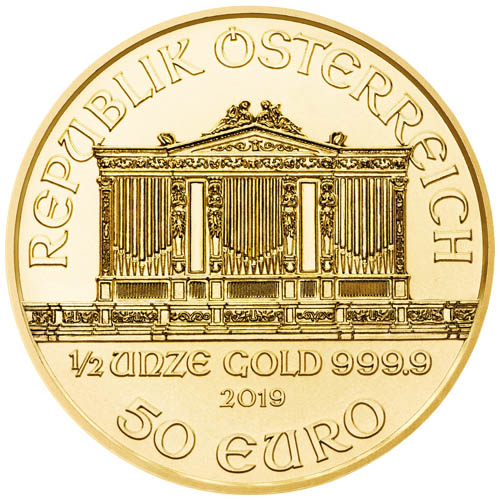 Austrian Gold Philharmonic Coins are available annually from the Austrian Mint. The official gold bullion coin of the nation, the series was originally introduced in 1989 with a 1 oz and 1/4 oz coin. Eventually, the series grew to include a total of four different fractional weights. Right now, 2019 1/2 oz Austrian Gold Philharmonic Coins are available to purchase online from JM Bullion.

Each 2019 1/2 oz Austrian Gold Philharmonic Coin in this product listing is available to you in Brilliant Uncirculated condition. The coins in this listing come in an individual option with protective packaging or a bulk option with mint tubes of 10 coins.

On the obverse of 2019 1/2 oz Austrian Gold Philharmonic Coins is the image of the organ within the Musikverein. Also known as the Golden Concert Hall, this is the primary location for Vienna Philharmonic performances in the national capital city of Vienna. The organ is often referred to as the Great Organ.

The reverse of 2019 Austrian Gold Philharmonic Coins includes a design of musical instruments commonly used by the members of the orchestra. The design focuses on a cello in the center which is flanked on either side by two violins. The background includes a harp, flute, bassoon, and a horn.

If you have any questions about these gold coins, please dont hesitate to ask. JM Bullion customer service is available to you at 800-276-6508, online using our live chat, and via our email address.