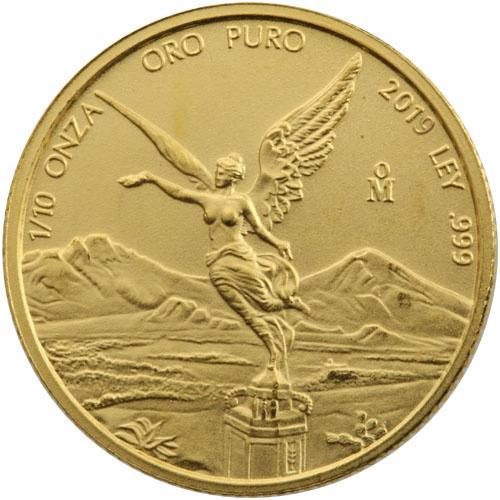 The Mexican Gold Libertad coins from the Mexican Mint have an interesting history. Introduced in 1981, the coins do predate other options such as the American Gold Eagle and Chinese Gold Panda. However, the latter coin series have a much longer tradition of staple issues. Today, 2019 1/10 oz Mexican Gold Libertad Coins are yours to purchase from JM Bullion.

The first release of the Mexican Gold Libertad coins occurred in 1981 when the Mexican Mint released the coins in three different weights. Bearing the same design on the obverse from the gold Centenario coins of the early and mid-20th century, the Gold Libertad was originally available in 1 oz, 1/2 oz, and 1/4 oz weights just in 1981. The coins were eventually established as an annual issue beginning in 1991.

All 2019 1/10 oz Mexican Gold Libertad Coins in this listing come to you in Brilliant Uncirculated condition. The 1/10 oz coins are offered inside of protective flips on an individual basis and represent one of the lower mintage figures in this series. Mexican Gold Libertads are unique among other major gold bullion coins in that they have very low mintage figures. The five weights in total for 2018 had a mintage of less than 10,000 coins. The 1/10 oz Gold Libertad from that release was third among the five at just 1,500 coins issued.

On the reverse of 2019 1/10 oz Mexican Gold Libertad Coins is the design of Mexico’s coat of arms. This seal has been modernized over the course of nearly 200 years of independence, with the modern symbol including an eagle on the arm of a cactus with a serpent locked in its talons and beak.

The obverse face of 2019 Mexican Gold Libertad Coins continues the use of Winged Victory as the primary design element. She stands powerful and righteous in the center of the design field. Behind her in the distance are the volcanic mountains of Popocatepetl and Iztaccihuatl. You’ll also note the markings of the coin’s weight, metal content, and purity on this side, along with the Mexican Mint’s “OM” mint mark.

All Mexican Gold Libertad coins are struck by the Mexican Mint, the oldest operating mint in the Western Hemisphere. The mint is controlled by the federal government and overseen by Banco de Mexico.

Please don’t hesitate to reach out to JM Bullion if you have questions. You can call our customer service team at 800-276-6508, chat with us live online, or email us directly.