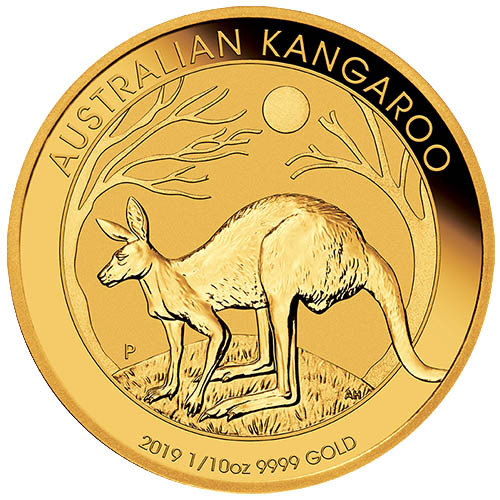 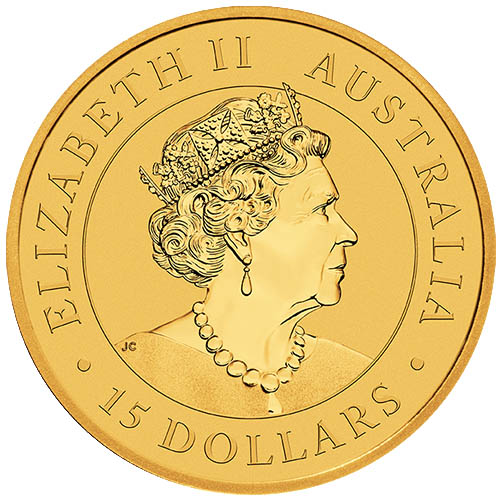 From 1986 to 1989, the designs on the series featured different depictions of gold nuggets. In 1990, the program began to feature the kangaroo in different poses instead. The kangaroo is an official symbol of Australia. It appears on the nations coat of arms, much of its currency, and other organizations such as the airline Qantas and the Royal Australian Air Force.

On the reverse of 2019 1/10 oz Australian Gold Kangaroo Coins, youll find the image of a singular kangaroo standing on a mound of dirt. The background field includes two barren trees and the sun rising into the sky, both of which are stylized and curved to fit the outer edges of the design field. Engravings of the series name, weight, purity, metal content, and year of issue feature on this side, along with the P mint mark of Perth Mint.

The obverse of 2019 Australian Gold Kangaroo Coins features the newest effigy of Queen Elizabeth II. The longest-reigning monarch in British history, Elizabeth IIs effigy here is from Jody Clark of the Royal Mint of England. It is the sixth image of the Queen to feature on Australian coinage during her reign and the first since the 1960s to capture her neckline and shoulders in the design as well.

These 2019 1/10 oz Australian Gold Kangaroo Coins are in Brilliant Uncirculated condition. The coins are issued inside of protective plastic capsules and feature a mintage of 200,000 coins for 2019.

We encourage JM Bullion customers to reach out to us with questions as they buy gold. You can call us at 800-276-6508, chat with us live online, or email us directly.