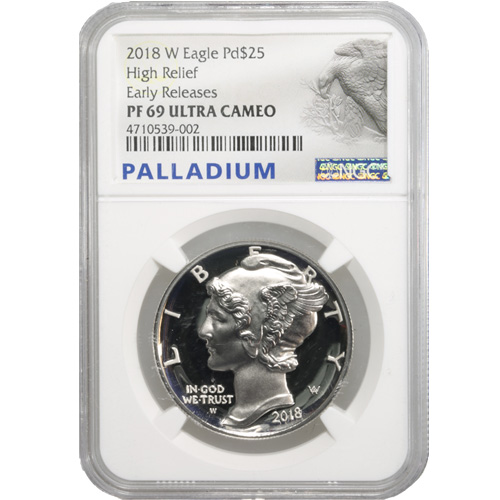 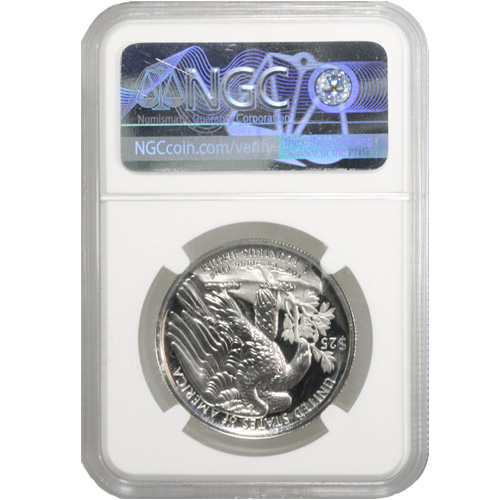 Like other American Eagle coins from the United States Mint, the Palladium Eagle uses one of America’s historic coin designs. In this case, it is the Winged Liberty design created in 1916 by Adolph A. Weinman for the US circulation dime. The image captures Liberty in left-profile relief and featured on the dime from 1916 to 1945.

On the obverse of all American Palladium Eagle Coins is Weinman’s Winged Liberty image. This design was known commonly while in circulation as the Mercury Dime because Liberty’s winged Phrygian cap gave her the resemblance of the Roman messenger god Mercury.

The reverse side of 2018-W 1 oz Proof American Palladium Eagle Coins includes the image of an American bald eagle perched on the edge of a cliff with its wings raised slightly behind its figure as its talons clutch the roots of a tree branch on the rocky outcrop. This design also came from Weinman and was created in 1907.

All of these 2018-W 1 oz Proof American Palladium Eagle coins are PF69 specimens with full, original mint luster and a maximum of two minor detracting flaws. The flaws accepted at this certification level include minuscule contact marks or hairlines found only outside of the primary focal points of the coin.

The UCAM, or ultra-cameo, designation means that these coins have strong, frosted design elements with deeply-mirrored, clear background fields. NGC certified coins are shipped with protective plastic slabs to ensure the condition of the coin for decades to come.

We encourage JM Bullion customers to reach out to us with questions at 800-276-6508, chat with us live online, or simply send us an email with your inquiries.