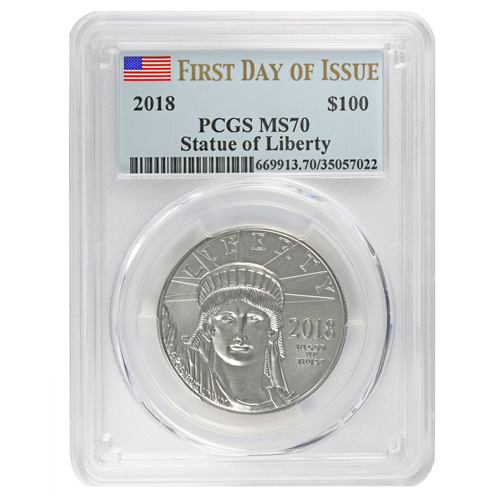 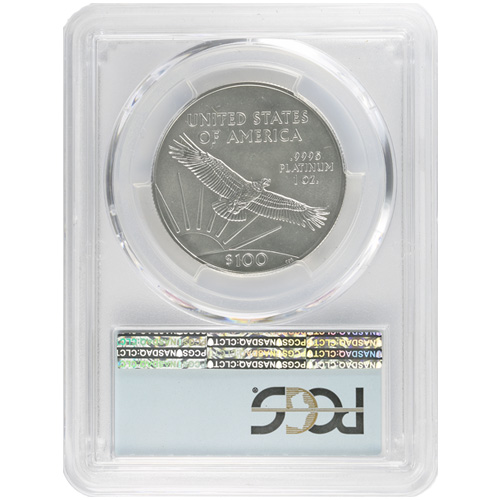 Each of the 2018 1 oz American Platinum Eagle Coins in this listing come to you with a protective slab from the PCGS that ensures the coins Mint State 70 condition. Coins certified as MS70 specimens exhibit full, original mint luster with no detracting flaws visible on the design elements or surface areas.

The First Day of Issue label included the slab from the PCGS is an important indicator of timing. These coins arrived at the PCGS for certification within the first 24 hours of the US Mints 2018 release date for its American Platinum Eagle coins.

While the American Platinum Eagles proof version has been available in every year since the 1997 introduction of the coins, the bullion coinage has faced a tougher road. The US Mint did not issue the bullion coins from 2009 to 2013 and did not issue the coin in 2015 either. The initial break in production was a result of low interest in platinum, while the latter was the result of insufficient platinum blanks.

On the obverse of 2018 American Platinum Eagle Coins is the face of Liberty from the State of Liberty. As she gazes out across the Atlantic Ocean as a beacon of freedom in the US, Lady Liberty holds her torch up high for all to see.

The reverse of Platinum Eagles includes the image of an American bald eagle flying. This bird soars majestically over the nation as the sun rises into the sky behind its figure. This design came from Thomas D. Rogers, a former artist at the US Mint.

If you have any questions about these coins, please feel free to contact JM Bullion. Our customer service team is available to you at 800-276-6508, online using our live chat, and via our email address.