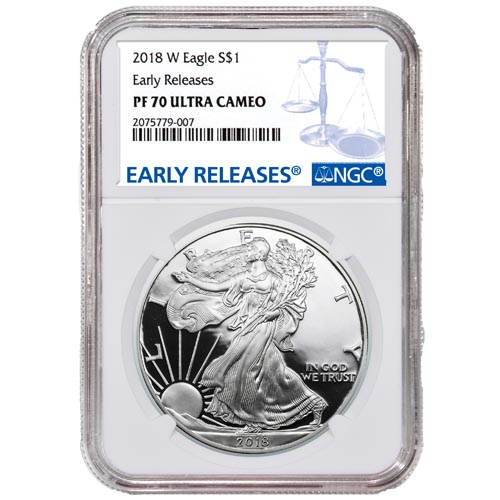 On the obverse of 2018 Proof American Silver Eagle Coins is Walking Liberty. With the American flag over her shoulders, she walks toward the setting sun as a sign of the nation’s constant march toward a brighter future. This was created in 1916 by Adolph A. Weinman.

Each 2018 Proof American Silver Eagle Coin available for purchase today is in perfect condition. Coins with a PF70 grade from the NGC have full, original mint luster and lack all detracting flaws. The Early Release specimen indicates the coins arrived within the first 30 days of their release date as set by the United States Mint.

We encourage all JM Bullion customers to reach out to us with questions. You can reach our customer service team members on the phone at 800-276-6508, chat with us live online through our live chat, or send us an email with your inquiries.