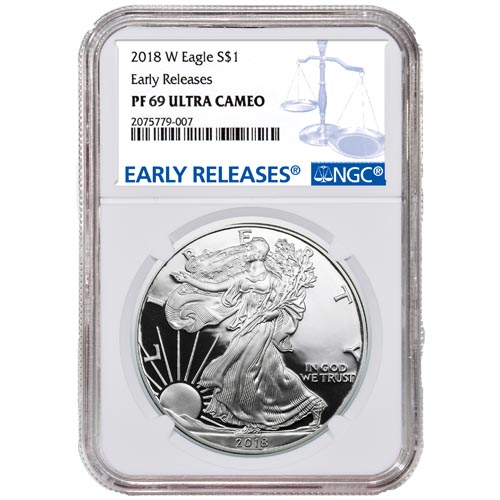 The Proof American Silver Eagle is the official collectible version of the nations silver bullion coin. Released in 1986 alongside its bullion counterpart, these proof silver coins for sale represent the most popular collectible coin issued by the US Mint annually. Today, 2018 Proof American Silver Eagle Coins are available to you now at JMBullion.com with a near-perfect certification.

Each 2018 Proof American Silver Eagle Coin listed here today is in near-perfect condition according to the NGC. Coins with a PF69 grade show full, original mint luster with a maximum of two minor detracting flaws. These detracting flaws are limited to minuscule hairlines or contact marks.

The Early Release designation for these coins denotes the time of their arrival at the NGC for certification. In this case, the coins arrived within 30 days of the release date set by the United States Mint for its 2018 Proof Silver Eagles. Additionally, the ultra-cameo designation indicates these coins have strong, frosted designs with deeply-mirrored, clear background fields that give the impression of the design floating over the coins surface.

On the obverse of all Proof American Silver Eagle coins youll notice Walking Liberty. This iconic American coin design was created in 1916 by Adolph A. Weinman during a period of American coin revival in the early 20th century. This design featured on the half-dollar coin from 1916 to 1947.

The reverse of all American Silver Eagle coins features one of Americas first-ever coin designs. The heraldic eagle first appeared on American coins in 1794, but todays version has been upgraded and modified by John Mercanti for use on the Silver Eagle.

Please feel free to reach out to JM Bullion if you have any questions about these Proof American Silver Eagles. Our customer service team is available to you on the phone at 800-276-6508, online using our live chat, and via our email address. You can always find todays silver price on our website as well!