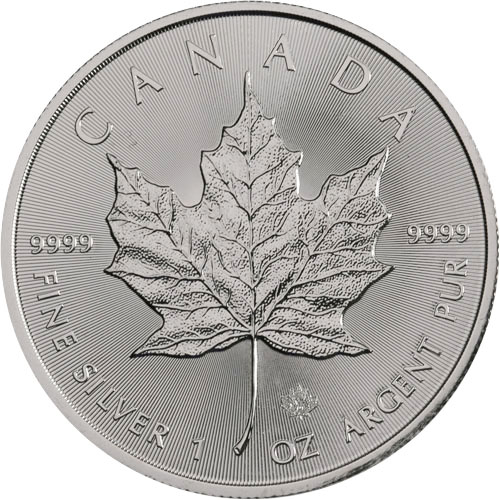 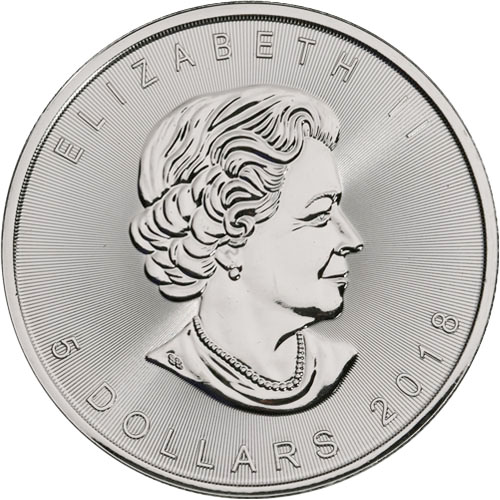 Any quantity available for $13.39 per oz over spot!
Add to WishlistLog In to add this product to your Wishlist
Free Shipping on $199+ Orders

The Silver Maple Leaf from the Royal Canadian Mint marks its 30th anniversary release in 2018. These beautiful silver bullion coins joined the Maple Leaf Series following the 1979 issue of the Gold Maple Leaf. Unlike its gold counterpart, the Silver Maple Leaf is available in just the 1 oz weight each year.

On the obverse of 2018 Canadian Silver Maple Leaf coins is the portrait of Queen Elizabeth II. Captured in right-profile relief, this is the fourth-generation effigy of Her Majesty to feature on Canadian coinage since 1952. It is the only image of the Queen on Canadian coins without a crown.

The reverse of the 2018 1 oz Canadian Silver Maple Leaf focuses on the sugar maple leaf in the center of the design field. Engravings identify the nation of issue, purity of the coin, and its metal content and weight. The background on both sides includes radial lines for security against counterfeiting. The reverse also has a micro-laser engraved maple leaf privy that features 18 at the center of the privy, and it is only visible under magnification.

All 1 oz Maple Leaf coins from the Royal Canadian Mint now also feature Bullion DNA. This additional form of security takes that micro-engraving and encodes, scans, and records it at the mint for future authentication.

All Canadian Maple Leaf coins are produced at the Royal Canadian Mint. Opened in 1908 with a sole facility in Ottawa, the mint expanded in the 1980s to feature a second facility in Winnipeg.

Please direct any questions you have to a JM Bullion associate. You can reach out to us at 800-276-6508, connect with us online through our live chat, or simply send us an email with your questions.

Brandon from WI - November 30, 2018
"These are a great value and a nice step up if you want something other than generic bullion bars or rounds. The 2018 Maple Leafs look great, no milk spots, although not quite as pretty as an ASE in my opinion but that\'s just me. I wouldn\'t hesitate to pick up another tube. Fast shipping and great service from JM Bullion as always."

Behrang from CA - November 24, 2018
"A Happy Thanksgiving 2018 weekend to JM team! We have purchased from JM since 2017 and so far we are very satisfied with their products, service and prices. We truly truly hope that JM continues to provide the excellent quality in the future and make a lot of customers happy. Best wishes to all."

James from AL - September 02, 2018
"The reverse of this coin is beautiful. I\'m not a fan of the obverse. And the strike has an apparently common error on the inner part of the outer rim."

Buddy from GA - August 30, 2018
"Received my first roll of Maple Leafs a week or so ago. Most dazzling silver coin I believe I\'ve seen. Have to add more to my collection. JMB shipped quickly after my echeck cleared. Great service, delivered as promised. I\'ll be back for more. "

Kevin from NH - August 24, 2018
"JM had these on sale, and I had to scoop some up. JM earns your business! Packaging came vacuum sealed as though there\'s treasure inside (there is)."

Daniel from CO - August 06, 2018
"The Canadian Silver Maple Leaf is my favorite silver coin by far. The finish and purity are second to none. Strangely, it\'s also less expensive compared to (IMO) inferior coins. JM Bullion makes it a snap to buy."

George from TX - July 27, 2018
"Delivery was fast and the coins arrived individually packaged and undamaged. Very happy Customer. As a side note: they are very competitive in comparison to the Royal Canadian Mint so ... keep up the good work. My only complaint? Why does my debit card buy less than a check? That\'s silly."