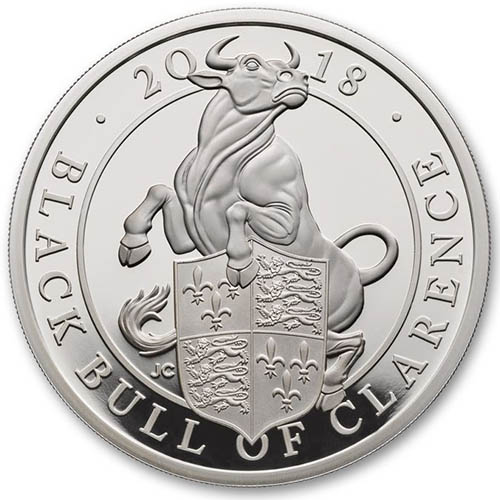 The coins of the Queen’s Beast Series from the Royal Mint vary in size, finish, and design option for investors and collectors. The coins come in gold, silver, and platinum in the bullion version, with proof coins offered in silver and gold. While the bullion coins have no set maximum for mintage, the proof coins have very low mintage figures. Today, 2018 5 oz Proof British Silver Queen’s Beast Black Bull Coins are available to you online from JM Bullion.

The proof and bullion versions of the Queen’s Beast coins have followed different release patterns in terms of the available designs in gold and silver bullion. The collectible proof coins debut the fourth image with the Black Bull of Clarence, while the Bull is the fifth issue in the bullion series of coins in the same 2018 release year.

Previous proof releases include, in order, the Lion of England, Unicorn of Scotland, and Red Dragon of Wales. Though the Griffin of Edward III appeared second in the bullion series, it has yet to appear in the proof collection.

All 2018 5 oz Proof British Silver Queen’s Beast Black Bull Coins are available to you inside of the original black display box from the Royal Mint. The coins are individually sealed inside of plastic capsules and housed in the display box along with an available Certificate of Authenticity.

The obverse of the 2018 Proof British Silver Queen’s Beast Black Bull Coin features Queen Elizabeth II. Her Majesty is shown here in right-profile relief in the fifth-generation design created for the Royal Mint in 2015 by engraver Jody Clark.

On the reverse of 2018 5 oz Proof British Silver Queen’s Beast Black Bull Coins, you’ll find the Black Bull of Clarence. Originally brought to the Royal Arms by the first Yorkist king, King Edward IV, it was a symbol used by his great-grandfather, Roger Mortimer, as well as his brother Richard III.

Please feel free to reach out to JM Bullion if you have any questions about these coins. You can contact us on the phone at 800-276-6508, chat with us live online, or simply send us an email with your inquiries.