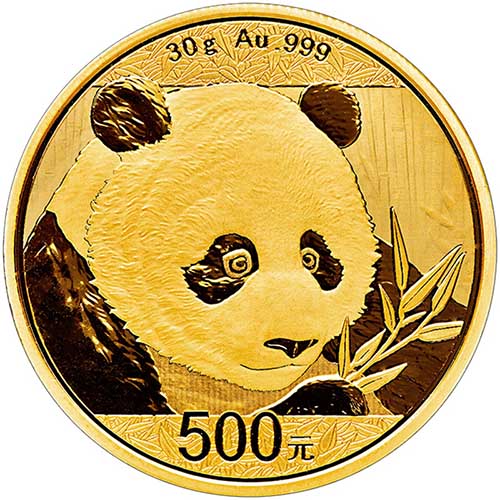 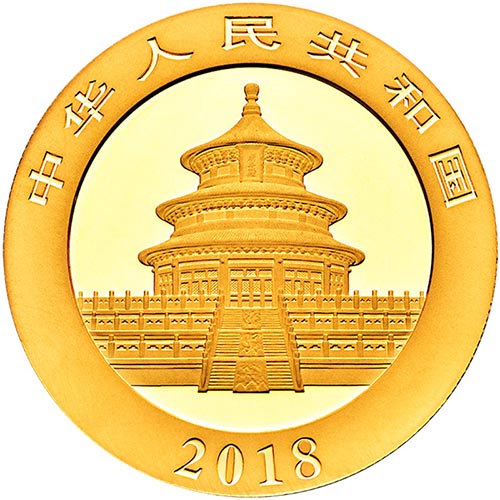 Each 2018 30 Gram Chinese Gold Panda Coin in this listing is in BU condition. Coins in BU condition exhibit no signs of wear and tear, but production flaws from the coining process are possible. These are limited to minor issues such as breaks in the luster, spotted surfaces, or contact marks.

Chinese Gold Panda coins represent one of the few gold bullion coin series released annually that feature a new design on the obverse each year. The only year in which a design was repeated was 2002, when the Chinese Mint reused the 2001 design.

On the obverse of all 2018 30 Gram Chinese Gold Panda Coins you’ll find the image of the lovable Giant Panda. The species of bear is native to China and found in the wild predominantly in the highlands of central China. A well-known symbol of the nation, the panda is a unique bear species in that nearly 99% of its diet comes from herbivorous sources such as bamboo.

The term Giant Panda is used colloquially to refer to the panda species, not so much as a nod to its impressive size, but as a means of differentiating it from a species of animal known as the Red Panda, which has the features and size of a fox.

All 2018 30 Gram Chinese Gold Panda Coins have the same reverse design used in the series since 1982. The Temple of Heaven features on this face of the coin, with the engravings around the outside rim bearing the nation of issue in Mandarin and the year of issue in Arabic Numerals.

The Chinese Mint produces all Chinese Panda bullion coins, both gold and silver. The 2018 release marks the third year of issue for the new metric-weight coins. In 2016, the Chinese Mint switched away from the Troy ounces weight to metric weights for measurements, making the 30 Gram coin the replacement of the former 1 Troy oz coin.

If you have any questions, please contact JM Bullion. We’re available at 800-276-6508, online using our live chat, and via our email address.