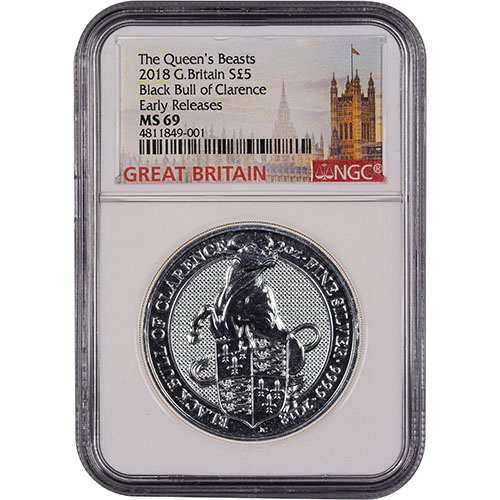 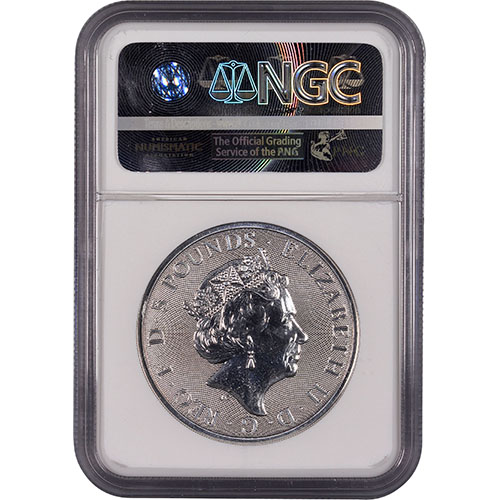 When the Royal Mint issued the first coins in the Queens Beast Series back in 2016, the 2 oz silver coin immediately became the first-ever 2 oz silver bullion coin from the Royal Mint in its more than 1,200 year history. The fifth release of the series bears the Black Bull of Clarence coin. Today, the 2018 2 oz British Silver Queens Beast Black Bull Coin is available to you online from JM Bullion with NGC certification.

The Black Bull of Clarence is the first heraldic beast in the Queens beast Series to come from a Yorkist King of England. King Edward IV ruled over England twice as a result of the Wars of the Roses. Edward IV was the first Yorkist King of England, and he ruled from 1461 to 1470 prior to the outbreak of war. After the war was settled and he had dethroned King Henry VI, he continued to rule from 1471 until his sudden death.

Additionally, the coins have an Early Release label. Coins with the ER label are certified arrivals that were received by the NGC within the first 30 days of the initial release of the coins by the Royal Mint in 2018.

On the reverse of 2018 2 oz British Silver Queens Beast Black Bull coin is the favored heraldic beast of King Edward IV. The Black Bull is featured with a royal arms used by Yorkist kings for 200 years that includes a quartered shield with the three golden lions in two quadrants and French lilies in the other two, marking the claim of Edward III to the French throne as well.

The obverse of British Silver Queens Beast Black Bull coins bear the right-profile portrait of Queen Elizabeth II. This is the fifth-generation portrait of Her Majesty and it includes the Queen with an ornate crown at the age of 89.

Please feel free to reach out to JM Bullion with questions regarding these coins. You can contact us at 800-276-6508, chat with us live online, or simply send us an email.