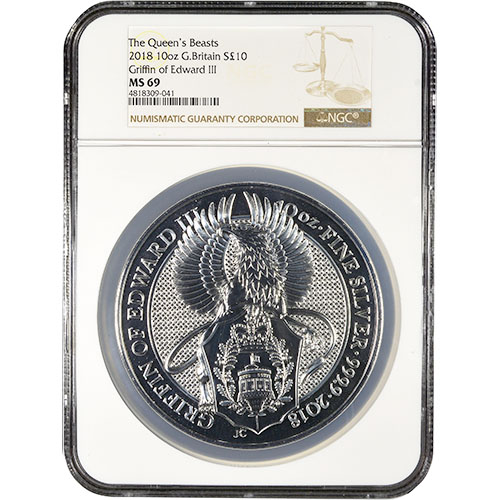 The second coin to feature in the British Queens Beast Series from the Royal Mint bears the design of the Griffin of Edward III. The mythological beast was the official seal of Edward III before he became king and remained with him throughout his rule of more than 50 years as King of England. Today, 2018 10 oz British Silver Queens Beast Griffin Coins are available to you online from JM Bullion with an NGC certification!

The Griffin is a mythological creature believed to be among the most powerful animals in the world. Associated with characteristics such as strength and courage, the Griffin was a watchful guardian with the keen eyesight to detect danger and the decisiveness to take swift action when necessary.

All 2018 10 oz British Silver Queens Beast Griffin Coins in this listing are available to you in near-perfect condition. The NGC certifies a coin as Mint State 69 when it possesses full, original mint luster with a maximum of two minor detracting flaws. These flaws must be limited in scope to minuscule contact marks or hairlines in order to earn the MS69 certification.

On the reverse of the British Silver Queens Beast Griffin Coin is Edward IIIs official seal. The Griffin of Edward III depicts the mythical beast standing tall and upright behind the royal shield of Edward III. Upon that shield is a depiction of a tower from Windsor Castle where Edward III was born in 1312.

The obverse of the 2018 10 oz British Silver Queens Beast Griffin Coins includes the right-profile portrait of Queen Elizabeth II. The fifth-generation design, this image captures the Queen at age 89 and was developed in 2015 by Royal Mint Engraver Jody Clark, who also created all 10 heraldic beast designs for the Queens Beast Series.

Please feel free to contact JM Bullion with your questions. You can reach out to us on the phone at 800-276-6508, chat with us live online, or simply send us an email.