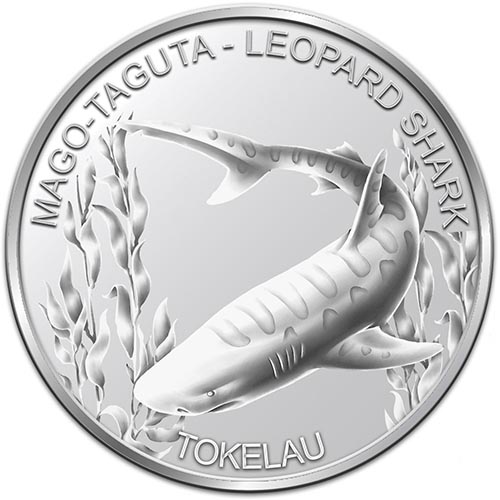 The tropical New Zealand territory of Tokelau may be small and somewhat unknown around the globe, but that doesn’t diminish its profile in the precious metals industry. An exciting 12-coin series of silver bullion coins for the territory features various animal species of the region, and the Leopard Shark appears on the fifth release in that series. The 2018 1 oz Tokelau Silver Leopard Shark Coin is available to you online today from JM Bullion.

The leopard shark is a hound shark species that is found predominantly along the Pacific coastline of North America, from the shores of Oregon in the United States down to Mazatlan in Mexico. The slender-bodied shark is easily identified by its leopard-like black markings on its otherwise gray body.

On the obverse of the Tokelau Silver Leopard Shark Coin you’ll find the right-profile portrait of Queen Elizabeth II. This fourth-generation design was created in 1998 by Ian Rank-Broadley, and it appears alongside what is known as the Tuluma. The national symbol of Tokelau, the Tuluma is a wooden tackle box used by generations of fishermen in Tokelau. It features an inscription of “Tokelau mot e Atua,” which means “Tokelau for God.”

The reverse of the 2018 1 oz Tokelau Silver Leopard Shark Coin includes the image of a leopard shark as it swims through a bed of kelp in the sea, which is its preferred habitat in the warm, tropical waters of the Pacific. An engraving above the design offers the series name in the local tongue and in English, as well as an engraving below of the nation of issue.

Each 2018 1 oz Tokelau Silver Leopard Shark Coin is available in BU condition. Coins in this condition have no signs of wear and tear, though you may notice minor flaws as a result of striking blanks during production. These flaws range from breaks in the luster and spotted surfaces to contact marks.

We encourage all JM Bullion customers to reach out to us with questions. You can call us at 800-276-6508, chat with us live online, or send us an email with your inquiries.