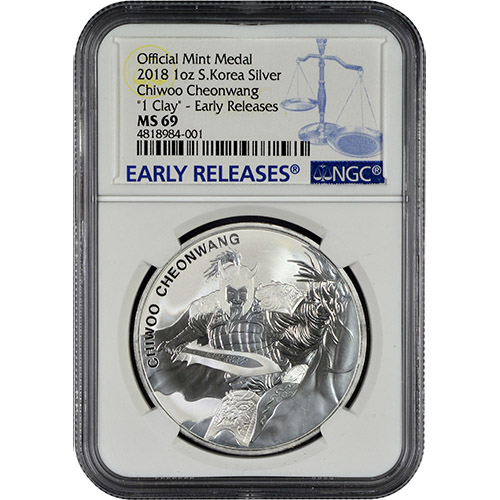 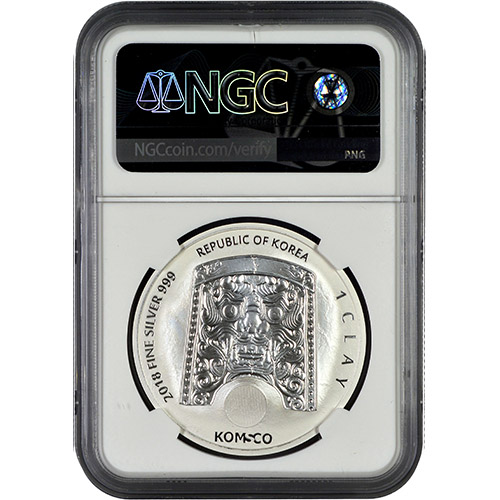 The Chiwoo Cheonwang series of gold and silver for sale from KOMSCO has quickly grown in popularity since its debut release in 2016. Mintage for the medals has risen with each year to meet demand, which is spurred on in part because of the alternating reverse depictions of Chiwoo that change with each passing issue of the medals. The 2018 1 oz South Korean Silver Chiwoo Cheonwang is currently available to you for purchase online from JM Bullion with NGC certification.

The South Korean Silver Chiwoo Cheonwang Series of silver and gold medals debuted in 2016. The product was so immensely popular that it sold out its total mintage in relatively short order. KOMSCO boosted mintage in 2017 and released a new design for the reverse medal with the same reception as the debut issue. Mintage is up slightly again in 2018, and demand is expected to climb still.

Chiwoo Cheonwang was a real person with a mythical aura surrounding his deeds. A leader of the Nine Li tribe of China, he is considered one of the founding fathers of China. However, his exploits on the battlefield achieved mythical status as some believed he could control the weather, summon fog, and tilt the elements in favor of his troops.

On the obverse of 2018 1 oz South Korean Silver Chiwoo Cheonwang medals is the image of his battle shield. On the face of his shield is the image of Do ggae bi, a horrible goblin-like creature said to help ward off other evil forces. This side of the medal features the nation of issue, weight, purity, metal content, and year of issue for the coin, along with a latent security image.

The reverse side of the 2018 South Korean Silver Chiwoo Cheonwang features a new design of the man often referred to as the God of War. This is the closest the design has ever brought the viewer to his face. You can see the violent determination in his eyes as he rides into battle with his sword leveled and ready to run through an opponent.

All 2018 1 oz South Korean Silver Chiwoo Cheonwang medals in this listing are Mint State 69 specimens from the NGC. Considered near-perfect, these medals have full, original mint luster with a maximum of two minor detracting flaws. The included Early Release label denotes the medals arrived at the NGC for certification within 30 days of their release from KOMSCO in 2018.

We encourage JM Bullion customers to contact us at 800-276-6508 with questions. You can also connect with us online using our live chat and email address.