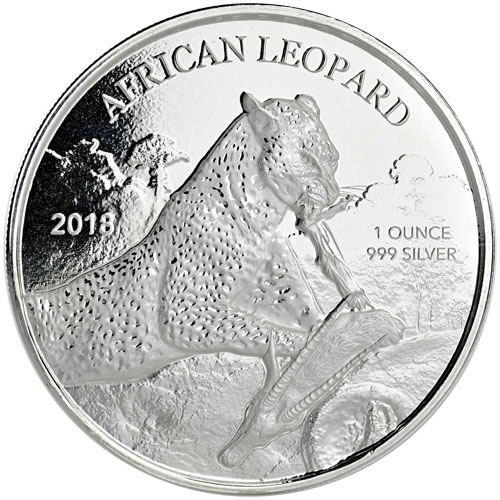 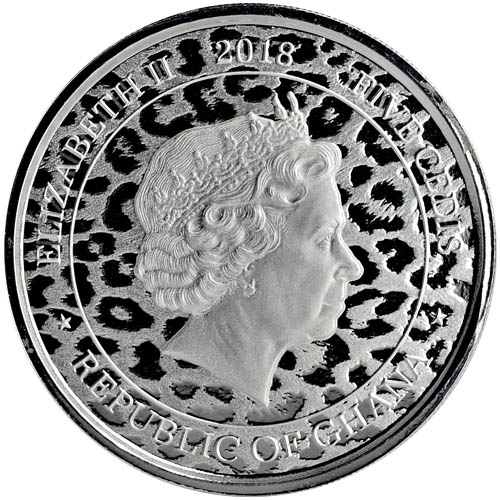 The Republic of Ghanas African Leopard coin series is another exciting entry in the list of African Silver Coins available from world mints. Introduced in 2017, the series uses new designs each year on the reverse and bears the bust of Queen Elizabeth II on the obverse side. Today, 2018 1 oz Republic of Ghana Silver African Leopard Coins are available to you online from JM Bullion.

The Republic of Ghana Silver African Leopard coin is issued by the Scottsdale Mint, a private minting facility in the United States. The series debuted in 2017 and is set to feature different reverse designs each year. This years design focuses on the unique practice of lardering their prey.

All 2018 1 oz Republic of Ghana Silver African Leopard Coins in this listing are available to you in Brilliant Uncirculated condition from the Scottsdale Mint. The silver coins are housed individually inside of protective plastic capsules or available in multiples with 5 coins housed in sealed sheets and 125 coins in boxes.

On the obverse of 2018 Silver African Leopard Coins, youll find the right-profile portrait of Queen Elizabeth II. This image of the Queen was created in 1998 by Ian Rank-Broadley for the Royal Mint and was used on British coinage from 1998 to 2015. The Republic of Ghana declared its independence from the United Kingdom in 1957, forming a Republic in 1960 and ratifying its modern constitution in 1992.

The reverse of 2019 1 oz Republic of Ghana Silver African Leopard Coins includes the image of a leopard high in a tree with its kill, a small antelope. The leopards practice of lardering consists of dragging its kill into the higher branches of a tree and leaving it there. Graceful climbers, the leopard enjoys the freedom to live on that kill for days at a time without worrying about scavengers taking its kill.

Leopards are the second-largest wild cat on the African continent behind the African lion. Leopards are typically much smaller than lions in weight, with long bodies capable of climbing trees with ease. Leopards historically had a range that included North Africa, but for the most part, are found in Sub-Saharan Africa.

Michael from FL - December 03, 2018
"These are absolutely stunning coins. I bought 2 of these bad boys. They come in capsules. The detail in them is second to none. They are limited to only 8500 being produced. JMB once again provided great service and product. Thank you JMB!"