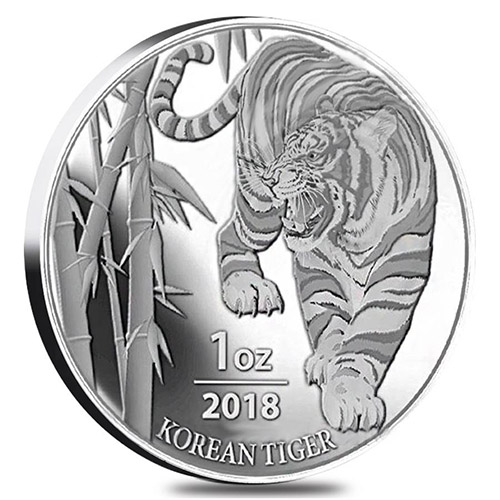 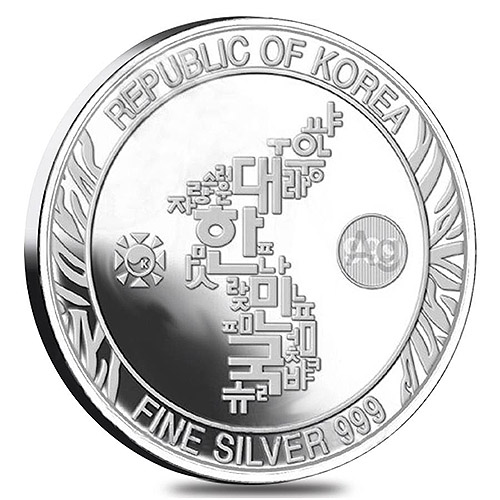 Most nations around the world have animal species associated with their culture and people. For Americans, the powerful and majestic bald eagle is the national animal. In China, the dragon is held in extremely high regard. For the people of Korea, the tiger has long held a place in Korean mythology and popular folklore. There is no more fitting animal for one of KOMSCOs growing bullion programs than the tiger. Right now, 2018 1 oz South Korean Silver Tiger Medals are available to purchase online from JM Bullion.

The Korean Tiger Series launched from KOMSCO in 2016 and was available originally in gold only. The South Korean Gold Tiger medals are available for a third consecutive year as of the initial release of these 2018 1 oz South Korean Silver Tiger Medals, and have featured a new obverse design of the tiger in each of those years. The reverse design has changed only once, from 2016 into 2017.

On the obverse of the 2018 1 oz South Korean Silver Tiger Medal is the image of the large, predatory cat as it prowls through the foliage. The tiger depicted is a Siberian tiger, with a historic range that once stretched through eastern Russia, eastern and southeastern China, Mongolia, and down into modern-day South Korea in the Korean peninsula. Engravings on this face include the year of issue, weight, and name of the series Korean Tiger.

There is no specific species known as the Korean tiger. Throughout human history, the Siberian tiger has been identified at various times based on the region it was spotted in. However, the tiger enjoys prominence in Korean culture as a popular subject of painting and sculptures. Even the 1988 Summer Olympics in Seoul, South Korea used a stylized tiger representing the Korean people.

For the reverse of the South Korean Silver Tiger Coin, KOMSCO introduces a beautiful design field that leaves international boundaries aside. The outline of the Korean peninsula is depicted in the center, with only symbols from the Korean language used in the depiction of the region. Design elements around the outside rim mimic the foliage on the obverse, with engravings of the nation of issue, metal content, and purity.

Each of the individual 2018 1 oz South Korean Silver Tiger Coins available to you today is in BU condition. Coins in brilliant uncirculated (BU) condition exhibit no indications of wear and tear, but you may find minor flaws resulting from the coining process. These flaws are limited however to breaks in the luster, spotted surfaces, or contact marks.

If you have any questions about this new silver bullion coin, please ask. JM Bullion customer service is available at 800-276-6508, online using our live chat, and via our email address.