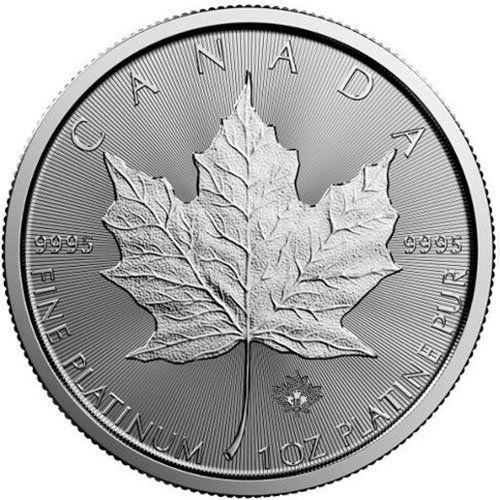 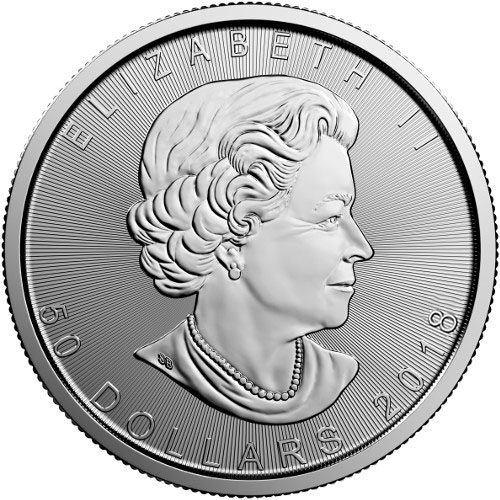 The Canadian Platinum Maple Leaf Coin is one of the preeminent platinum coins in the precious metals industry. Introduced in 1988, it was one of the first major platinum bullion coins offered to investors. The Royal Canadian Mint halted the program briefly, but since 2009 it has been offered every year in a 1 Troy oz weight. Right now, the 2018 1 oz Canadian Platinum Maple Leaf Coin is available to purchase online from JM Bullion.

Each 2018 1 oz Canadian Platinum Maple Leaf Coin in this listing is available to you in BU condition. Coins in BU condition exhibit no signs of wear and tear, although you may notice a range of minor flaws. The coins may have flaws that range from breaks in the luster and spotted surfaces to contact marks as a result of the coining process.

On the obverse of the 2018 1 oz Canadian Platinum Maple Leaf Coin you’ll find the effigy of Queen Elizabeth II. Her Majesty’s portrait features on all Canadian coinage, with this design representing the fourth-generation design used on Canadian coins. It was designed by Susanna Blunt, a Canadian artist, in 2003 for use on Canadian bullion and circulation coinage.

The reverse of all Canadian Platinum Maple Leaf Coins includes the famous image of the sugar maple leaf. The official emblem of Canada, the maple leaf appears on the national flag and is surrounded on the coins by engravings of the nation of issue, weight, metal content, and purity. Each of these coins features the new Bullion DNA security feature of Canadian coins, a first in the Platinum Maple Leaf issue.

Bullion DNA is marked by the presence of the micro-engraved laser maple leaf privy mark. Within this mark is a two-digit code visible only under magnification that denotes the year of issue for the coin. Each of these marks is scanned, coded, and stored with the Royal Canadian Mint to validate the authenticity of the coins.

If you have any questions, you can call JM Bullion at 800-276-6508. You can also reach out to us online using our live chat feature and our email address options.