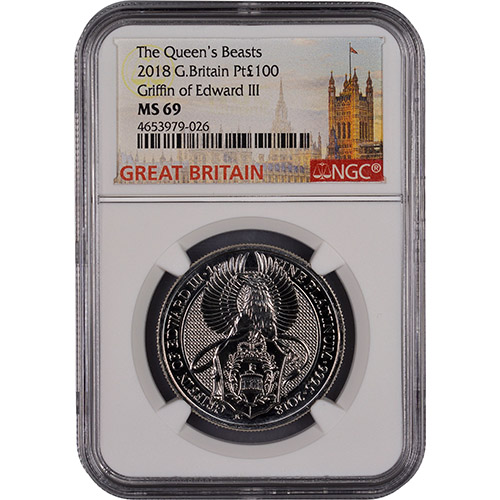 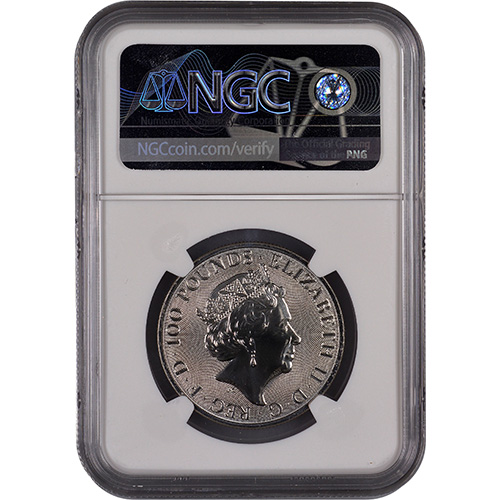 The 2018 issue of platinum coins in the Queen’s Beast Series features the Griffin of Edward III. The Griffin first appeared in the bullion collection in the silver and gold coins as the second release, and now features in the expanded offering that includes a platinum option. Right now, 2018 1 oz British Platinum Queen’s Beast Griffin Coins are available to purchase online from JM Bullion.

Each 2018 1 oz British Platinum Queen’s Beast Griffin Coin in this listing is available to you as a near-perfect product. Certified Mint State 69 by the NGC, these coins exhibit full, original mint luster with a maximum of two minor detracting flaws. Those flaws are limited in nature to minuscule contact marks or hairlines.

On the reverse of the 2018 British Platinum Queen’s Beast Griffin Coin is the seal of Edward III and his famed Griffin. The griffin is a mythical beast believed to be strong and courageous and was often associated with keen sight and swift action. This is likely why many used the symbol of the griffin as one of a watchful guardian.

King Edward III ruled England for more than 50 years as the King of England and Lord of Ireland. The Griffin of Edward III is associated with the King because of his use of the beast on his private seal, which also featured the image of a falcon.

The obverse of British Platinum Queen’s Beast Griffin Coins bears the right-profile portrait of Queen Elizabeth II. Her Majesty appears here in a fifth-generation portrait recently released in 2015 by the Royal Mint. The effigy was created by Jody Clark, a Royal Mint engraver who became the youngest to design the monarch’s image at just 33 years old.

If you have any questions, please contact JM Bullion. You can reach us on the phone at 800-276-6508, online using our live chat, and through our email address.