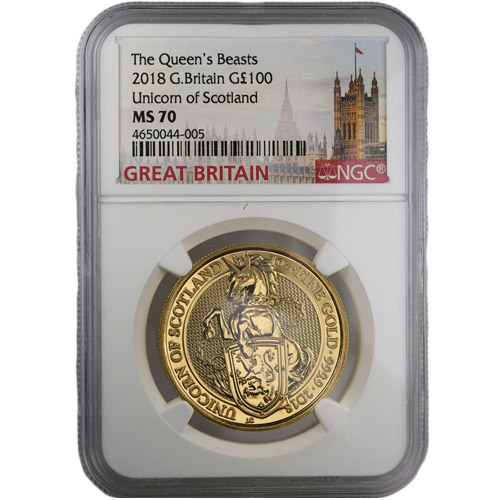 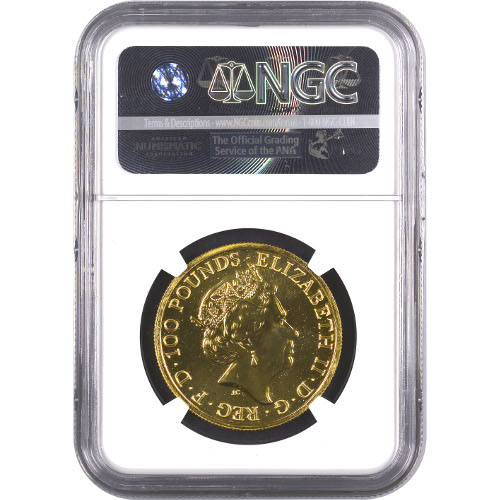 In the British Queens Beast Series from the Royal Mint, the bullion coins are offered in three metals and four weights. For example, the silver collection includes the Royal Mints first-ever 2 oz silver bullion coin and a 10 oz silver coin. The gold coins come in a oz option and this 1 oz gold choice. The 2018 1 oz British Gold Queens Beast Unicorn Coin is now available to you for purchase online from JM Bullion.

Each of the designs in this series to date is the creation of Jody Clark. Clark will be recreating all 10 of the heraldic beasts featured as wooden statues during the coronation of Queen Elizabeth II in 1953. Clark is a Royal Mint Engraver, and at 33 years old he became the youngest engraver to design the Queens effigy for British coinage when he developed the fifth-generation portrait of Her Majesty for the Royal Mint.

On the obverse of all British Gold Queens Beast Coins youll find the right-profile portrait of Queen Elizabeth II. Her Majesty is on the obverse of all British coinage, both circulation and commemorative bullion. On the throne since her fathers death in 1952, Queen Elizabeth II is Britains longest reigning monarch in history and the current longest reigning monarch in the world.

With the purchase of these 2018 1 oz British Gold Queens Beast Unicorn Coins today, you receive a product in perfect condition. The NGC issues Mint State 70 grades to coins with full, original mint luster and no detracting flaws of any kind present.

We encourage JM Bullion customers to reach out to us with questions. You may call our customer support team at 800-276-6508, chat with us live online, or simply email us directly.