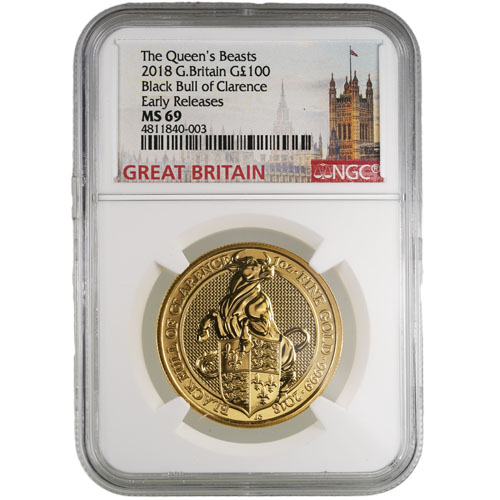 The gold coins for sale in the Queens Beast Range from the Royal Mint include two options with each release. The Royal Mint makes these coins available in both 1 oz and oz weights, with stunning designs and .9999 gold purity. The 2018 1 oz British Gold Queens Beast Black Bull Coin is available to you today online from JM Bullion with NGC certification.

Roger Mortimer, better known as the Duke of Clarence, was the man responsible for providing a line to the throne of England for the House of York. His great-grandson, Edward III, used this connection to claim the throne as King of England with the help of the Earl of Warwick, a man known as the kingmaker in England.

The Black Bull of Clarence was a long a design chosen by the Duke of Clarence, and used by Edward III in his Royal Arms. The Queens Beast Series features the Black Bull as the fifth design in the collection, which is available in all coins in the range from silver and gold to platinum.

On the obverse of all 2018 British Gold Queens Beast Coins is the fifth-generation portrait of Queen Elizabeth II. Jody Clark, the Royal Mints youngest-ever engraver to complete a monarchs effigy, created this right-profile portrait of the Queen at age 89 in 2015 to replace the 1998 design from Ian Rank-Broadley.

The reverse of the 2018 1 oz British Gold Black Bull Coins bears the image of the Black Bull of Clarence. Standing tall of a version of the Royal Arms used by Edward III, this quadrant shield has the three gold lions of England adopted by Richard I in two quadrants and an addition from Edward III to support his claim to the French throne. Those other two quadrants bear the golden lilies of France.

Your 2018 1 oz British Gold Queens Beast Black Bull Coin purchased in this listing is a near-perfect specimen with a Mint State 69 grade. It showcases full, original mint luster along with a maximum of two minor detracting flaws. These flaws are limited to minuscule hairlines or contact marks.

Early Release, or ER, labels included in the slab denote that the coins were received by the NGC for certification within the opening 30 days of its release in 2018 by the Royal Mint.

We encourage JM Bullion customers to contact us at 800-276-6508 with questions. You can also connect with us online through our live chat service or email address.