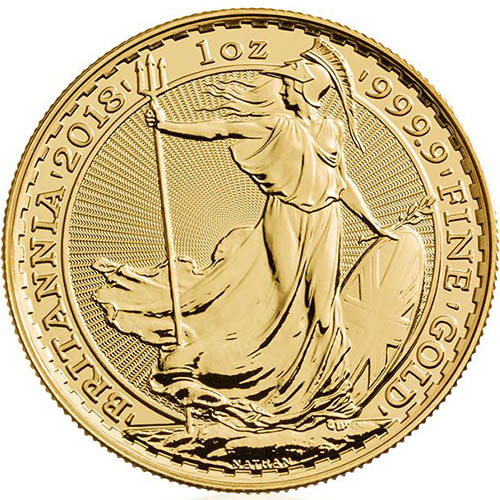 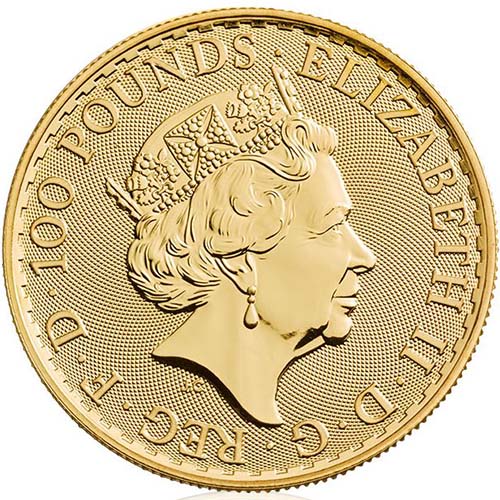 Introduced in 1987, the Gold Britannia is the first modern bullion coin offered by the Royal Mint. The Britannia name and image has circulated through European and British culture over the past two thousand years, and since the unity of the kingdoms of England and Scotland in the 18th century, Britannia has appeared on British coinage. The 2018 1 oz British Gold Britannia Coin is available online to you today for purchase from JM Bullion.

The Gold Britannia coin debuted in 1987 from the Royal Mint, and since that time has undergone changes in its gold purity. While the designs on the obverse and reverse remain the same, with only the Queen’s effigy updated on the obverse, the metal content has changed since the coins were introduced.

The reverse of all 2018 1 oz British Gold Britannia Coins includes the design of Britannia. Once used as a term to describe the British Isles and then used as a female personification of British people, Britannia is an imposing figure. She wears a Corinthian helmet in defense of the island. Her trident wields control over the seas of the English Channel, and her shield featuring the Union Jack is ready to hold back any invader.

All 2018 1 oz British Gold Britannia Coins in this listing are in BU condition. Coins in BU condition have no signs of wear and tear, but minor flaws are possible. As a result of the normal striking process, breaks in the luster, spotted surfaces, and contact marks are possible on these coins.

We encourage all JM Bullion customers to contact us with questions. You can reach out to us on the phone at 800-276-6508, connect with us online through our live chat, or send us an email with your inquiries.

Charles from TN - September 14, 2018
"I’ve been very pleased with all my transactions with JM Bullion. Ever item is exctly as described and tests perfectly when it arrives. I’ve yet to find a better price on the web or locally. Additionally, customer service has been extremely helpful when I’ve needed to have a question answered."