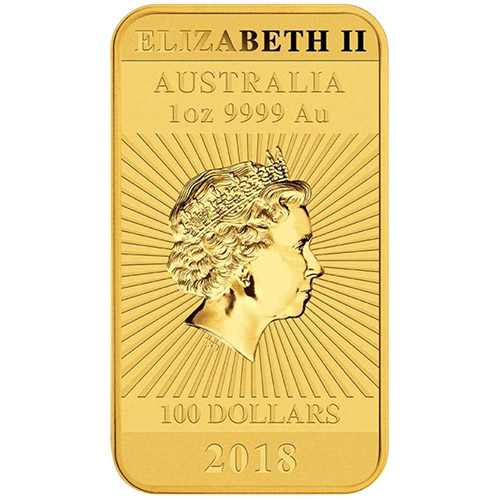 The dragon is arguably the most important and divine creature in Chinese culture. Perth Mint is well-known for the production of stunning silver and gold coins with Chinese cultural themes, such as its Lunar Series collections, but its breaking new ground with a 2018 series of silver and gold coins for sale. Right now, 2018 1 oz Australian Gold Dragon Coins are available to purchase online from JM Bullion.

Each of the 2018 1 oz Australian Gold Dragon Coins in this product listing comes to you with an individual protective plastic capsule. The coins have a very low mintage figure and follow the earlier release in 2018 of a silver coin with the same design. Both coins represent the first major bullion coin in the world with a rectangular design.

The dragon is an ancient and mystical creature understood in different terms by various cultures around the world. In Chinese culture, the dragon is a revered creature that is believed to have a divine origin. It has simultaneously been used as a symbol of power and strength, making it popular among former emperors, but also as a symbol of wealth and good fortune to average Chinese citizens.

On the reverse of 2018 1 oz Australian Gold Dragon Coins, youll find the image of a dragon whose body slithers up the vertical length of the bar. Included in the design is a flaming pearl which the dragon chases. There are background design elements reflective of the dragons association with control of the weather, wind, and water. Blowing clouds and crashing waves of water are depicted within the design.

The obverse side of 2018 Australian Gold Dragon Coins includes the right-profile portrait of Queen Elizabeth II. Her Majesty is depicted in the fourth-generation British design created in 1998 by Ian Rank-Broadley for the Royal Mint of England. The design has been in use on British and Australian coinage since 1998. There is a sunburst design behind the Queens bust and engravings of her name, the nation of issue, weight, purity, metal content, face value, and year of issue for the coin.

Perth Mint is the oldest-operating mint in Australia and one of the most respected in the world today. Opened in 1899, the Perth Mint is today owned and operated by the state government of Western Australia.

If you have any questions, please reach out to JM Bullion. Our customer service team is available to you at 800-276-6508, online using our live chat, and via our email address.