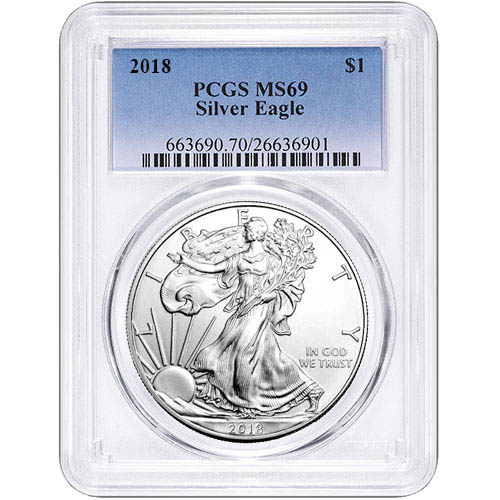 All 2018 1 oz American Silver Eagle coins in this listing have Mint State 69 certifications. The PCGS assigns this near-perfect grade to coins with full, original mint luster and no more than two minor detracting flaws. Examples of acceptable flaws include only minuscule contact marks or hairlines found outside of the primary focal points of the coin.

On the obverse of 2018 American Silver Eagles is the image of Walking Liberty. This iconic image was created in 1916 for use on the circulation half-dollar coin. Adolph A. Weinmans depiction of Liberty reflects Americas march toward a brighter future. She is shown in left-profile relief walking toward the sun on the horizon, always chasing that brighter day ahead.

Please dont hesitate to reach out to JM Bullion with your questions. You can call us on the phone at 800-276-6508, chat with us live online, or email us directly.