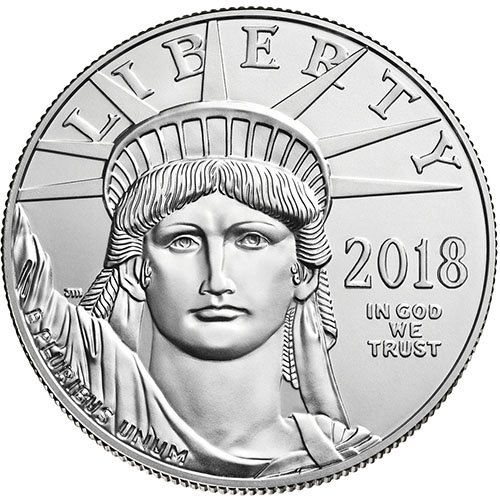 While these American Platinum Eagle bullion coins have the same obverse and reverse designs each year, the reverse side of Proof Platinum Eagles is changed each year to feature a new design element focusing on either Liberty or the bald eagle. This makes the Platinum Eagle the only bullion coin from the United States Mint to alternate designs.

On the obverse of these 2018 1 oz American Platinum Eagle Coins youll find the image of Liberty. This effigy of Liberty is based upon the Statue of Liberty and focuses solely on her face. The solemn appearance of Liberty captured here was created by John Mercanti, former Chief Engraver of the United States Mint from 2006 until his retirement in 2010.

The reverse of the American Platinum Eagle bullion coin includes the design known as eagle soaring above America. It captures a bald eagle in flight, wings spread wide, as it glides over the United States with the sun rising in the background. Created in 1997 by Thomas D. Rogers, a former artist with the US Mint, this is the only design to ever appear on both the bullion and proof versions of the Platinum Eagle. It is the annual design on the reverse of the bullion coin, and appeared as the first proof design in 1997 only.

Your 2018 1 oz American Platinum Eagle Coin available here today is in BU condition. Coins in BU condition have no visible signs of wear and tear, but you may notice minor flaws such as breaks in the luster, spotted surfaces, or contact marks. These coins are available in individual protective flips, mint tubes of 20 coins, or Monster Boxes of 100 coins (5 tubes of 20 coins).