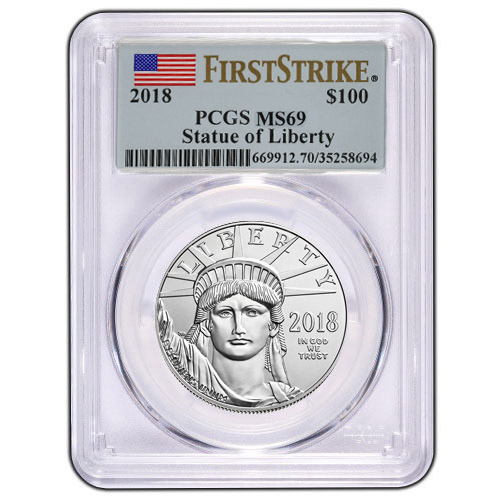 American Platinum Eagle coins were introduced in 1997 as the third option in the American Eagle Series, and the first new coin introduced in the program in more than a decade. The series of American Eagle coins launched in 1986 with the Silver Eagle and Gold Eagle, expanding first with these platinum coins in 1997. Right now, 2018 1 oz American Platinum Eagle Coins are available to purchase online from JM Bullion with a perfect certification!

Each of the 2018 1 oz American Platinum Eagle Coins in this product listing is available to you in near-perfect condition according to the PCGS. Coins that earn a Mint State 69 grade exhibit full, original mint luster, but also feature two minor detracting flaws. These flaws are limited to minuscule contact marks or hairlines found only outside the primary focal areas.

The included First Strike label denotes the arrival for certification of the coins. The PCGS issues the First Strike label for coins that arrive at their depository or an approved third-party location within the initial 30-day window of release by the United States Mint for its 2018 Platinum Eagle coins.

American Platinum Eagle coins marked the first serious expansion of the American Eagle Series. After launching in 1986 with gold and silver coins, the platinum coins joined the collection in 1997. Burnished versions of the gold and silver coins debuted in 2006, and the next major expansion was in 2017 when the US Mint introduced the first-ever American Palladium Eagle.

The obverse of the American Platinum Eagle coin features Lady Liberty. This depiction of Liberty is based on her look as the Statue of Liberty, and was created for this coin series in 1997 by US Mint Engraver, and future Chief Engraver, John Mercanti.

If you have any questions for JM Bullion customer service, please feel free to ask. You can reach out to us on the phone at 800-276-6508, chat with us live online, or send us an email.