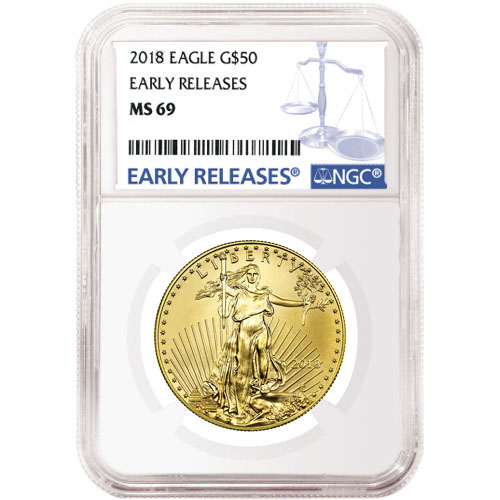 Augustus Saint-Gaudens originally created the image used on the American Gold Eagle Coin in 1907. He was approached by President Theodore Roosevelt in 1905 to help lead a revolution in American coining to bring the coins up to date with the nation of the image as an emerging global power.

Saint-Gaudens created the image of Liberty by 1907, but intended for the design to feature on a high-relief coin. The United States Mint did not possess the capability to do so at the time, with his image not appearing in high relief until 2009 on a special release coin.

All 2018 1 oz American Gold Eagle Coins in this product listing are available in near-perfect condition from the NGC. Coins with a Mint State 69 grade have full, original mint luster and a maximum of two minor detracting flaws. These flaws are limited in scope to minuscule hairlines or contact marks, and are found only outside the primary focal areas.

Early Release coins are those received within a particular timeframe by the NGC. Coins with the ER label must arrive at the NGC within 30 days of the release date issued by the United States Mint for its 2018 American Gold Eagles.

On the obverse of the American Gold Eagles is Saint-Gaudens Liberty design. It features Lady Liberty as she strides forth confidently from the capital city of the nation in Washington DC. She holds a torch in her right hand as a guiding light for the nation and is featured with her hair flowing in the breeze.

The reverse of the 2018 1 oz American Gold Eagle Coin includes the design of a cluster of bald eagles. The family is featured with one adult returning to the nest clutching an olive branch as the other adult guards a group of hatchlings.

Please feel free to reach out to JM Bullion if you have any questions. You can contact us on the phone at 800-276-6508, online using our live chat, and via our email address.