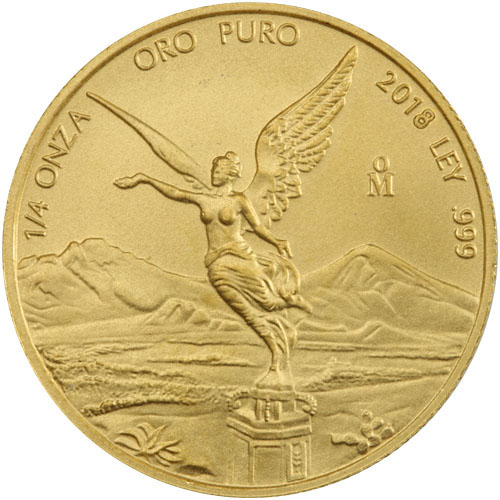 Each 2018 oz Mexican Gold Libertad coin available to you in this JM Bullion product listing is in BU condition. Coins in this condition exhibit no signs of wear and tear, though you may notice minor flaws from the coining process. These flaws include breaks in the luster, spotted surfaces, or contact marks.

On the obverse of all 2018 oz Mexican Gold Libertad Coins is the design of Winged Victory. First used on the gold Centenario coin in 1921, this modern depiction is based upon the figure of Winged Victory as found on the Mexican Independence Victory Column in Mexico City. The column and state were built in 1921 to celebrate 100 years of freedom.

The reverse of all oz Mexican Gold Libertad Coins features the modern coat of arms for Mexico. The nations official seal is based upon designs used for several centuries dating back to the Aztec Empires use of the symbol to organize soldiers in groups during battle. It features a golden eagle battling a rattlesnake on a cactus branch.

The Mexican Mint is the nations official sovereign mint. Located in Mexico City, the mint is controlled by the federal government and overseen day-to-day by Banco de Mexico. It strikes bullion and circulation coins, and also prints paper money.

If you have any questions, please contact JM Bullion. Our customer service associates are available to you at 800-276-6508, online using our live chat, and via our email address.