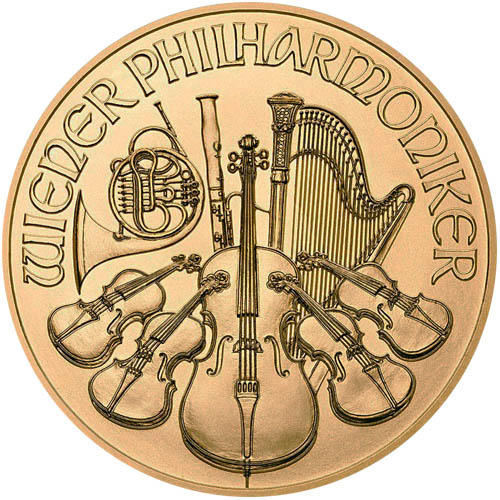 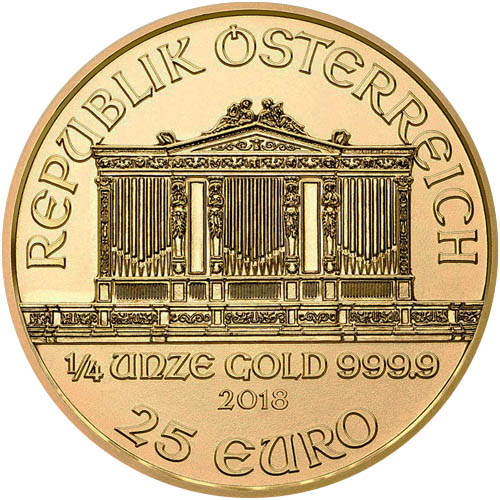 Austrian Gold Philharmonic Coins are one of Europe’s best selling products. Introduced in 1989, these gold coins are one of a handful from Europe that started with face values in a native currency and are now released as the only European bullion coin with the shared Eurozone currency (Euros). The 2018 ¼ oz Austrian Gold Philharmonic Coin is now available to you for purchase online from JM Bullion.

The Austrian Philharmonic coin series has undergone a variety of changes in its offerings since 1989. While the designs of the obverse and reverse side have remained the same, options for investors and collectors have only grown in this time. The program started that year with the 1 oz coin and these ¼ oz Austrian Gold Philharmonics.

Since that time, there have been five additions to the program and a one-time release on the 15th anniversary that tipped the scales in a major way. The first expansion was the 1/10 oz gold coin in 1991, followed by the ½ oz coin in 1994. The final gold addition came in 2014 with the introduction of the 1/25 oz Gold Philharmonic.

Between the ½ oz and 1/25 oz coin though, the series added a Silver Philharmonic coin in 2008 and a Platinum Philharmonic in 2016. Also, a 1,000 Troy oz Austrian Gold Philharmonic Coin was introduced in 2004 to celebrate the 15th anniversary of the coin series. The coin had a nominal value of €100,000 (Euros) and was 10 times wider and 1,000 times heavier than the traditional 1 oz coin.

The obverse of the 2018 ¼ oz Austrian Gold Philharmonic features the image of the Musikverein. This stunning pipe organ is found inside the Golden Music Hall in Innere Stadt, the borough of Vienna wherein the Vienna Philharmonic Orchestra performs.

On the reverse of the 2018 Austrian Gold Philharmonic Coin is the image of nine different instruments used by members of the Vienna Orchestra. These instruments are centered on a cello and include a Vienna horn, bassoon, harp, and four violins in total.

Your 2018 ¼ oz Austrian Gold Philharmonic Coin is available in BU condition. Coins in BU condition have no signs of wear and tear, though it is possible for minor flaws to result from the striking of the die during the course of production. These flaws are limited to breaks in the luster, spotted surfaces, and contact marks.

JM Bullion encourages customers to contact us with questions. You can reach our customer service team at 800-276-6508, online using our live chat, and through our email address.